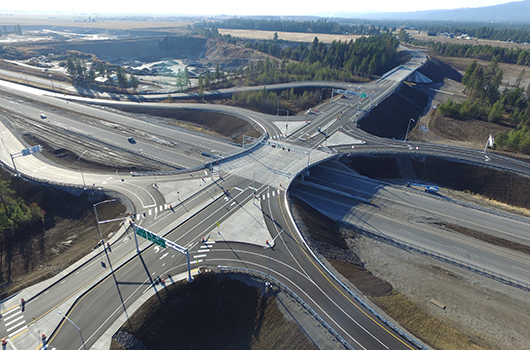 The new interchange at US-95 and Idaho Highway 53 opened today and is the first of its kind in North Idaho.

“A single-point urban interchange (SPUI) is new to our area, so drivers should take time to learn how to use it and be patient with others as they do the same,” ITD Project Manager Joey Sprague said.

Watch video on how to use the interchange.

Compared to traditional interchanges in the area, traffic will be controlled by one signal.

“Because all the traffic movements are centralized into one signal, a SPUI operates more efficiently than other interchanges in our area,” Sprague said. “With a more traditional interchange like a diamond or clover leaf, you might have to wait at two different signals to get where you need to go, but at a SPUI you’ll only have to get through one.”

Work began in July 2019, and since then, crews also installed a temporary signal at ID-53 and Ramsey Road, widened and realigned ID-53 and replaced the bridge over the railroad. Government Way, signed as Pope Road, was extended north of ID-53 to serve as a frontage road.

The next phase of the overall project is the construction of an overpass at Garwood Road, which will start next spring and will require the closure of its intersection with US-95.

“That closure will last until next fall,” Sprague said. “During and after construction, drivers will need to use the frontage roads and interchanges at ID-53 or Chilco Road to access US-95.”

Changes are funded primarily with an estimated $41 million from the GARVEE program and another $13.9 million in federal aid.

“Once all of these changes are complete, US-95 will be safer and more efficient with new frontage roads, a new interchange, and a greater speed limit of 70 mph north of Boekel Road. With the two signals removed from US-95, the last signal heading north from Coeur d’Alene to Sandpoint will be at Lancaster Road,” Sprague said.