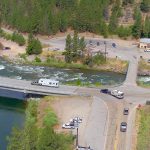 Editor’s Note: This article was originally published in August 2018. It has been updated with more recent crash data and relevant action by ITD.

Every summer, thousands of residents from the Treasure Valley escape the heat of the valley floor and head north into the cool beauty of the mountains, especially on weekends. When it’s time for all those people to head home Sunday night, traffic can get congested on our mountain roads.

Recently, a number of people have reached out to ITD concerned about one intersection in particular: Idaho Highway 55 and the Banks-Lowman Road. Those who sought recreation and cooler climes in Crouch or Garden Valley can find themselves in a long line of vehicles waiting to turn left (south) onto ID-55.

So, what’s to be done? Why is congestion so bad? What’s ITD doing about it? This article is part of an effort by the Idaho Transportation Department to provide information about the situation, what the Department is doing, and what some options may be moving forward. 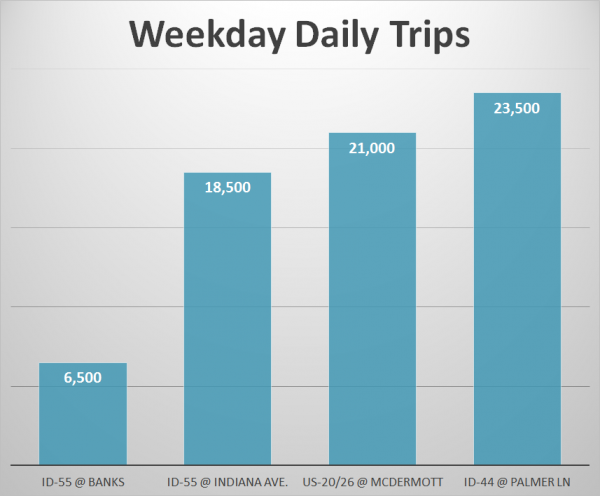 Idaho 55 is a major corridor connecting the Treasure Valley, and some of the most pristine recreational destinations in America: Garden Valley, Cascade, Donnelly, and McCall. It’s also one of two options for Treasure Valley residents to access Central and Northern Idaho, the other being US-95.

Because of this, ID-55 sees a major increase in traffic on the weekends. On a typical summer weekday, the section by Banks sees about 6,500 trips, split equally headed north and south. So there’s roughly 3,250 cars heading north and 3,250 cars heading south in a given day.

To give you a point of reference, let’s compare that section of ID-55 with other two-lane facilities in Southwest Idaho. ID-55 in Nampa sees around 18,500 weekday trips. US-20/26 in Meridian sees around 21,000 trips each day during the week. And a two lane section of ID-44 (State St.) west of Eagle experiences 23,500 daily trips in the work week.

You can check out our traffic counts by visiting our website.

The high volume of southbound traffic does mean it can take a while for a safe opening to appear for those waiting to turn left out of the Banks-Lowman Road. Between the waits for an opening, and the increased number of people leaving the Garden Valley area, you get congestion and increased drive times.

What does this mean? When we look at the data, the intersection of ID-55 and the Banks-Lowman Road functions well Monday through Saturday. On Sunday, for a few hours in the afternoon as everyone that traveled up during the week heads home, traffic on ID-55 is heavy and speeds are reduced. The flow on ID-55 is reasonably uninterrupted but there are long wait times for those turning left on the highway from the Banks-Lowman Road. Data reveal the significant congestion concern primarily happens for a few hours during the 15 Sundays of summer (Memorial Day to Labor Day).

Safety of the intersection

In addition to the concerns of congestion, people are concerned this might be a dangerous intersection. We can look to the data and see how things compare.

Our current confirmed traffic crash data goes up to 2017. If we look at the five-year history of this intersection, from 2013-2017, there have been 5 reportable crashes. Two of those crashes resulted only in property damage. Two resulted in one person suffering minor injuries. The final crash resulted in one serious injury and two minor injuries. We are aware of the crash that occurred in2018, involving the tragic loss of one life and injury to several others, not yet reported in our database.

Additionally, the Department tracks High Accident Locations (HAL) across the state and ranks them. The ranking is determined by the frequency of crashes (how many there have been), the severity of those crashes, and the rate of crashes (crashes per 1 million miles traveled). Based on current data, this intersection does not rank in the top 1,000 HAL intersections across the state. By comparison, the intersection of ID-55 and ID-44 in Eagle is #165.

As the Department weighs decisions, a number of factors are taken into consideration. Data, such as that outlined above, is one of those. The Department’s mission is “Your Safety. Your Mobility. Your Economic Opportunity.” So we gather the best data regarding these three factors to make sound decisions on how to best invest our limited transportation dollars

We care about you, the people of Idaho, who we serve. Hearing from you is very important to us. It’s important we give you the information so you see what we see, and better understand how we make these decisions.

Our main effort to mitigate heavy weekend travel at this intersection is to flag it during the holiday weekends, when traffic is at its highest. Those weekends are Memorial Day, Fourth of July, and Labor Day. Flagging is effective because the person at the intersection can make judgement calls in the moment and quickly stop and redirect traffic. Flagging costs the Department around $3,500 a day.

Also in 2019, ITD was awarded funding through the Federal Lands Access Program (FLAP) for preliminary design of improvements to the intersection. Completing this work will evaluate viable options to address the seasonal congestion. This is the a major step in outlining the cost and prioritizing a project.

ITD has been actively engaging with the communities in the Boise and Valley Counties to address this concern. A town hall meeting was held last Fall and additional working groups will be held in the coming months. The goal of this initiative is to partner with the businesses, event organizers, and governing bodies to find workable short-term solutions.

Flagging can help improve traffic flow on busy weekends, but Idaho is growing and traffic is growing with it. So what can be done to decrease congestion at the ID-55 and Banks-Lowman Road intersection?

Before exploring these, it’s important to once again put this intersection in context. It does not rank high in terms of congestion or safety concerns. That’s a significant consideration when it comes to getting the most bang for the taxpayers’ buck. That said, ITD has been investigating possible opportunities for changes.

The following are some of the solutions ITD is exploring. Currently, there are no plans to implement any of these. Each of them will have trade-offs we want the public to consider.

This is the most popular suggestion we’ve received from the public. It’s an understandable solution. If the problem is cars coming down ID-55 not giving an opening for those turning out of Banks-Lowman, put in a signal to stop the highway traffic long enough to move some people out. 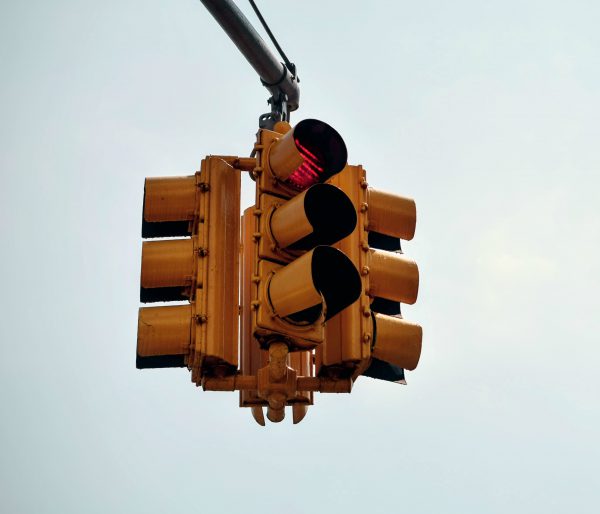 Well, it gets a little more complicated than that.

First, the one-lane bridge to the boat landing, owned by Boise County, makes for an unusual intersection. In order to safely direct traffic on and off that leg, you need some extended signal timing, which will add considerable wait times and therefore congestion, primarily to ID-55, but also impacting Banks-Lowman Rd.

Another concern is that a signal will force the currently free-flowing traffic on ID-55 to stop. This creates a queue. As that queue backs up, major safety concerns arise. Imagine a driver coming down the mountain going 55mph, turning a corner and suddenly coming upon break lights. A signal adds new safety and mobility concerns, with every bit as much risk of serious injury as the existing condition, and possibly more overall delay for travelers.

A roundabout can keep traffic flowing and provide better opportunity for those coming off Banks-Lowman to get onto the highway.

Again, you have the issue of the one-lane bridge complicating things. Legs of a roundabout typically allow two-way travel.

Roundabouts also require a big footprint, something this intersection doesn’t have. Things are very tight with three of the quadrants bordered by rivers and the last hugging a mountainside. A roundabout would either require a massive bridge structure or significant carving out of the mountainside.

We anticipate this project would require a new bridge on the south leg of the intersection to accommodate the extra lane, and we’d have to cut into the mountainside north and south of Banks-Lowman to make room for the lane and the tapers before and after.

The silver lining for this option is the age of the bridge on ID-55. Though it is safe today, it will have to be replaced in the near future due to its age and condition. Replacing it with a wider bridge becomes much more cost-effective at that time. Currently, this bridge is not scheduled for replacement in our 7-year plans.

We have absolutely heard from those of you wanting ITD to “fix this problem.” Hopefully this article shows we continue to look at ways to address the issue and that there’s no easy solution.

As we consider all of these actions, we have to weigh the cost/benefit. The long-range options explored above will cost tens of millions of dollars. And in the context of crash data and congestion, it is far from our highest priority. That does not eliminate the possibility of making improvements, it just makes it much harder.

In the meantime, we continue to commit to flagging on the busy holiday weekends. We will continue to explore other alternatives.

We also encourage those who recreate on the weekends along this corridor to plan ahead. Consider leaving earlier or later to avoid the heaviest travel times. Consider alternate routes such as Idaho Highway 21 – the folks at Lowman and Idaho City would be happy to see you. Most importantly, anticipate that congestion is a reality during the summer weekends and use your best behavior to stay safe and keep your fellow motorists safe.