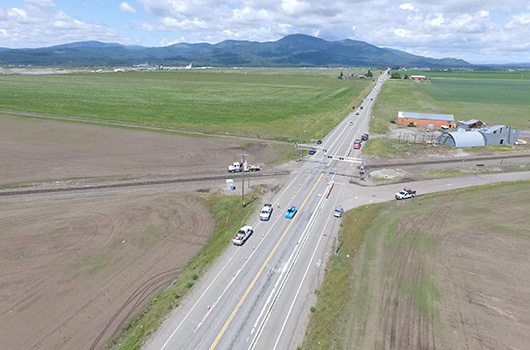 Work is now underway on a multi-year effort to improve and expand Idaho Highway 41 from two lanes to four lanes between Post Falls and Rathdrum.

“Expansion will better serve the drivers who use this route every day, which in some sections is nearly 20,000 motorists,” Resident Engineer Ryan Hawkins said. “The existing highway will essentially become the southbound lanes of the new highway, allowing much of the work to be constructed with minimal impact.”

Over the next three years, new lanes will be added to the east of the existing lanes, along with a wide path for bicyclists and pedestrians. Outside of city limits, the lanes will be divided by a grassy median.

An overpass will be built to carry traffic safely over the railroad tracks that cross the highway just north of Hayden Avenue. The other crossing south of Hayden Avenue will be removed. View a rendering of the overpass.

Utilities will be relocated or installed this year throughout the corridor to allow for the beginning of paving next spring. For information on staging, download this fact sheet.

“Traffic will continue to run on the current lanes while two new lanes and the railroad overpass are built to the east,” Hawkins said. “Once those lanes are finished, traffic will be moved onto that section while the old section is reconstructed.”

Crews with the primary contractor Scarcella Brothers, Inc. have already started necessary demolition efforts and are now fully mobilized. Email updates will be available throughout construction by signing up at itdprojects.org/id41corridor.

These changes were designed in cooperation with the cities of Rathdrum and Post Falls, and both cities are supporting expansion with funding.

Construction costs for expansion between Prairie Avenue and Boekel Road total $31.5 million, and the other portion between Mullan Avenue and Prairie Avenue will be bid this fall. Over the next seven years, ITD is investing more than $131 million to expand ID-41 between Post Falls and Rathdrum and upgrade the interchange at Interstate 90.