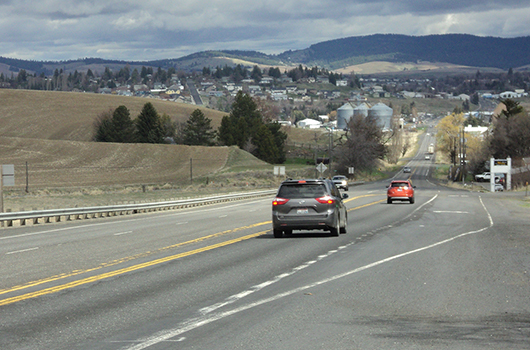 The Idaho Transportation Department is now seeking bids on a project to expand US-95 south of Moscow.

Three years of work will transform 6.5 miles of US-95 between Thorn Creek and Moscow, shifting it less than a mile to the east and turning it into a four-lane highway safer for all motorists. The new route will tie in at Reisenauer Hill and feature flatter grades, fewer approaches and less severe curves. The current route is the last two-lane section between Moscow and Lewiston.

“Although drivers won’t see major excavation start until at least mid-April, bidding now allows us to get started on the business of planning for construction with a contractor,” Hoff said.

The first year of work is expected to focus on the southern end near Reisenauer Hill, with the following two years building the remaining connection to Moscow.

“We want drivers to know that this long-awaited safety project is finally ready to be built,” said Ken Helm, an ITD Program Manager who has been working on this project since it was first proposed in 1998.

Contractors can find the advertising package at itd.idaho.gov/business for at least four weeks, with the contract awarded as early as November 9. The contract is expected to be awarded for approximately $71 million.