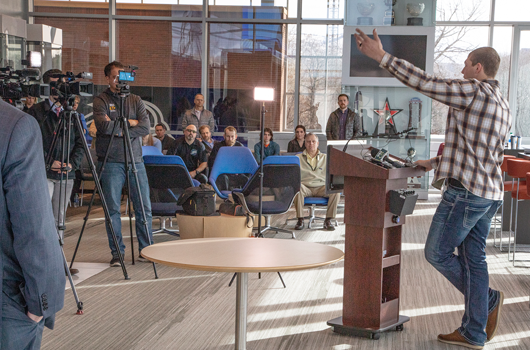 Brought to life in a new educational campaign, “Rules to LVE By,” today’s announcement kicks off a partnership between ITD and Vander Esch focusing on the importance of wearing a seat belt at all times while in a vehicle.

“We are thrilled to partner with Leighton on this project,” said ITD Highway Safety Manager John Tomlinson. “He believes in hard work and doing things the right way, these are his rules to live by. Wearing a seat belt is one of those rules and we hope other Idahoans follow that example.”

Statistics show that eighty-five percent of people in Idaho buckle up. At the same time, nearly two-thirds of people killed in motor vehicle crashes were not properly restrained. The majority of those people were killed on rural roads.

“Having Leighton onboard can really make a difference in those rural communities,” Tomlinson said. “That’s where he grew up and he really understands the values of a small town but he also has a broad appeal that will resonate with all Idahoans.”

“I’m grateful that I can help save lives and give back to the place that will always be my home,” Vander Esch said.