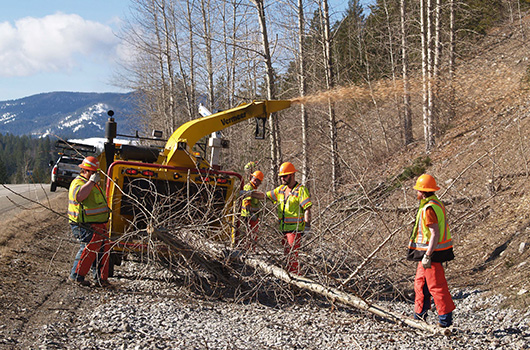 ITD asks media partners and drivers to tune in each day this week (May 18 – 23) to the department’s Facebook and Twitter pages to see different types of work zones.

Drivers are familiar with larger road construction projects, which are typically well-marked and have better visibility, but they may not be as familiar with short-duration operations.

These can pop up anywhere, at any time. Whether it is a highway worker stopping to remove a shredded tire or animal carcass from the road, or performing maintenance work like repairing guardrail right next to the travel lanes, these jobs generally put workers closer to the road, and closer to danger. There is less time for the worker or the driver to take evasive action when encountering short-duration operations.

Just last year, an ITD operator was killed outside Arco in a short-duration operation, reminding us all of the importance of being safe and vigilant in work zones across the state.

During this week, ITD also remembers the sacrifices of other workers lost over the years while on the job – many of them were killed in work zones. Since this picture was taken, there have been two more markers added to the Fallen Workers Memorial, bringing the total to 40 workers since 1960.

“Work zones can be the most hazardous areas on our state highway system,” ITD Safety Manager Randall Danner said. “We urge drivers to use extreme caution when passing through these areas so they can arrive at their destination safely and our workers can return home to their loved ones.”

In addition to short-duration maintenance operations, ITD has dozens of projects planned this year with information on itdprojects.org. Each project is different in terms of traffic revisions and reduced speed limits. Please check 511.idaho.gov for traveler information.