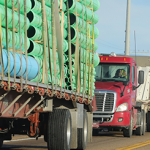 Here are the preliminary numbers of total cars traveling to and through Idaho for the 2017 Solar Eclipse:  Our traffic counters near the state borders counted 449,530 cars entering the state between August 18 and August 21. This number was an increase of 71,140 during that same time frame last year when 361,270 cars were counted entering Idaho at those same locations.  ITD estimates more than 160,000 visitors came from out of state for the event (see methodology below).

The bulk of the visitors came from Utah and Oregon. Areas where the traffic was busiest include I-15 between Utah and Idaho Falls, US-93 near Craters of the Moon, US-20 near Arco, ID-95 from Payette to Riggins, and ID-55 north of Eagle.

Many locations in the mountains saw a steady stream of increased traffic throughout the weekend, up until the morning of the eclipse. Monday morning, routes along the I-15 corridor saw the biggest spike for day-of traffic. Travel home did cause congestion along the above routes. Most of that cleared up by 5:00 p.m. Monday, though congestion lingered on I-15 until 9:30 p.m.

ITD experienced an increase in visitors to our online resources, including the eclipse web page and blog posts. Total unique visitors to these pages is 82,000.

This number is meant only to be an estimate of visitors to Idaho for the 2017 solar eclipse and is not intended to be authoritative. ITD’s method for estimating visitor numbers took the change in traffic count from 2016 to 2017 at border locations (marked with *), multiplied by 2.5 people per average vehicle, minus 5% for local traffic. This method does not capture the number of visitors who may have flown into Idaho via commercial flights or backcountry airstrips. 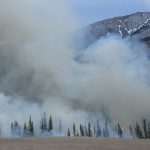 Hundreds of thousands of people are expected to travel to Idaho to view the August 21 solar eclipse – right in the middle of fire season. The Idaho Transportation Department (ITD) has some simple tips to avoid accidentally starting a wildfire during your road trip.

The majority of wildfires in Idaho are started by us humans. Driving in your car can be the source of several ways those fires start, whether it’s hanging metal hitting the road or throwing out lit cigarettes.

Here are four things to do while you’re on the road to see the solar eclipse:

ITD hopes everyone traveling to see the eclipse has a fun and safe time. By checking your car before you leave and making smart choices on the road, you can help ensure this experience stays wildfire free.