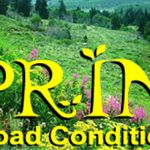 As Idaho prepares to emerge from a historic winter that brought the most snow many areas had seen in decades, a new set of challenges face our road maintenance crews.

Hillsides saturated by snow and rain can release rockslides given the slightest provocation. Moisture coming in on the top of existing snowpack bring the threat of springtime avalanches. Suddenly higher temperatures lead to extensive melting, flood watches statewide and water-over-the-roadway concerns.

And drivers emerge from winter hibernation to return to area highways. It is as critical as ever for motorists to have access to current travel information, available at 511.idaho.gov.

Meanwhile, ITD crews will be constantly monitoring our state roads, looking for break-up, potholes, hazards, and general deterioration. The department is committed to removing or repairing any problem areas as soon as possible. 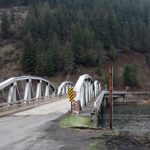 With crews working long hours and the weekend, work on the East Kooskia Bridge finished ahead of time and the bridge opened to travel Feb. 28, at least a week early. The improvements allowed ITD to boost the bridge’s load-carrying capacity from 6,000 lb. Gross Vehicle Weight (GVW) to 16-20 tons GVW, depending on axles.

It’s just the latest example of ITD providing great service to our customers, the users of the transportation system.

Work on the 82-year-old bridge began Feb. 20 and finished by the end of the month. Prior to repairs, the bridge’s condition allowed only for lightweight passenger vehicles.