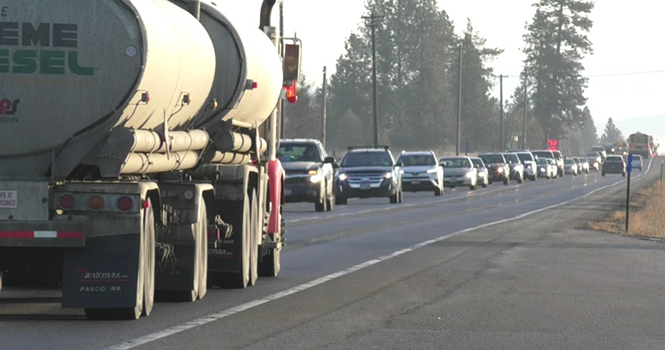 As highways in Idaho start to warm up this spring, they become more susceptible to damage from heavy traffic, prompting state and local transportation agencies to enforce seasonal restrictions. ITD has currently restricted several routes in North and East Idaho.

VIDEO: Congestion and repairs as a result of spring breakup.

Restrictions on state highways are noted on 511 and are put up days in advance to prepare drivers for congestion on their routes. They apply to trucks that have a gross vehicle weight rating of 10,000 pounds or more. On state highways, vehicles of this size are required to reduce their speeds to 30 mph and weigh no more than 14,000 pounds per axle. On U.S. highways, they still must reduce their speed to 30 mph but can weigh more in accordance with legally permitted loads. Spring breakup restrictions are not applied on interstates.

While they can cause significant congestion on highways with a mix of commercial and commuter traffic, restrictions are preventative measures that ultimately save drivers’ time and resources.

In the spring heavy loads can cause rapid deterioration of pavement. As temperatures increase, the frozen base underneath the road thaws and becomes saturated with water, which creates a weaker section below the pavement that can lead to potholes and cracks. Highways can even appear to pump water at this time of year.

Springtime damage may result in months of repairs in the summer, diverting maintenance dollars from being invested into other routes. The damage can also be so severe as to be beyond the scope of normal highway maintenance. Compare this cost to drivers with time spent following a slow truck or waiting for safe opportunities to pass.

Foremen across the state track conditions to know when to enact breakup limits. Restrictions are usually imposed on older highways with deteriorating bases that don’t drain moisture as well.

These seasonal restrictions are only in place as long as necessary and save taxpayer dollars from being spent on damage that could have been prevented.

This spring, practice patience on the road and protect our highways from unnecessary damage.