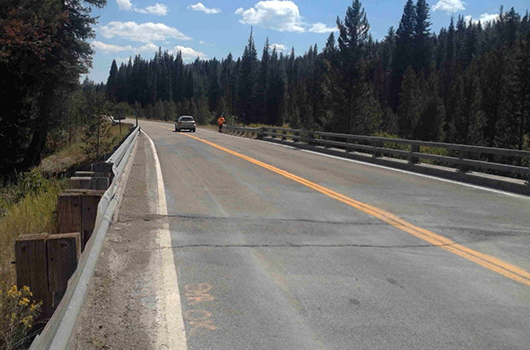 The Idaho Transportation Department is expected to start construction on a bridge replacement next week on Idaho Highway 75 in Blaine County. Commonly referred to as the Four Mile Bridge because of its proximity to Galena Lodge, the structure spans the Big Wood River approximately twenty miles north of Ketchum at milepost 148.2.

“The current bridge was built in 1953 and has exceeded its life expectancy,” said South-central ITD Project Manager Brock Dillé. “In the coming months, we will replace the existing three-span bridge with a new single-span structure. Unlike the current bridge, the new structure will not have any piers in the water which will more readily allow for the natural meandering of the river.”

The new structure will be wider in order to accommodate 12-foot lanes with 3-foot shoulders in each direction. This will provide for more separation between vehicles and bicycles on the roadway and improve safety in the area.

While construction is ongoing, traffic will be reduced to a single lane. Temporary traffic signals will be in place and motorists can expect average wait times of approximately 15 minutes.

“There will be occasions when certain construction activities will require slightly longer wait times,” said Dillé. “Our goal is to keep these as minimal as possible throughout the project.”

A push button will also be in place for bicyclists who recreate in the area. Drivers and cyclists alike are advised to adhere to signals and watch for crews and heavy equipment during working hours.

Construction on the project is expected to be completed by late October of this year. The general contractor is Cannon Builders of Blackfoot.