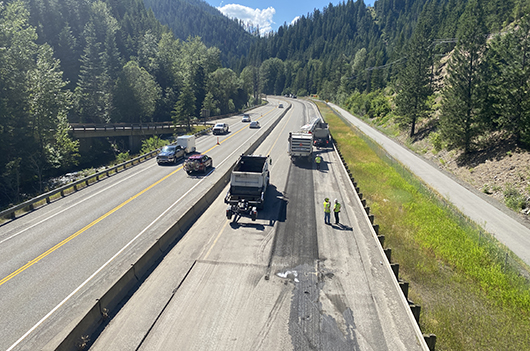 Next week conditions will change in the I-90 work zone where the freeway is being repaved between Wallace and Mullan, with funding for the project provided by “Leading Idaho.” All traffic will shift from the eastbound lanes to the westbound lanes by the end of the week.

“This roughly marks the halfway point of the project,” ITD Project Manager Cole Mosman said. “We’re keeping traffic to one lane in each direction and moving it to other side of the freeway so we can get to the remaining work.”

Eastbound ramps that were closed with the first phase of paving will now be open, but drivers heading westbound will only be able to get on or off at Exit 62 in Wallace or Exit 69 in Mullan.

“We want to remind drivers to stay engaged, especially through work zones,” Mosman said. “All season long we have seen drivers become impatient and try to pass. Passing isn’t allowed in the work zone and trying to do so can have terrible consequences.”

Construction began in mid-July to repave this 5-mile section. This next phase of work also includes the building of an 85-foot-long wall and fencing at milepost 67 to protect drivers from potential rockfall.

These improvements were added to the project after boulders fell down a steep chute onto the freeway during two separate events in June and November of 2020.

The project was originally scheduled to be constructed in 2024 but was advanced to this summer with funds from Governor Brad Little’s “Leading Idaho” investment, which includes a one-time transfer from the state’s budget surplus of $126 million dedicated in 2021 by the Idaho Legislature.

Work will wrap up in late October.

Other work zones on I-90 include paving near the bottom of Fourth of July Pass, bridge replacements in Kellogg and a range of smaller projects to address bridges, concrete barrier and ramps. Drivers should plan extra time for commuting and check 511.idaho.gov for traffic conditions and restrictions on up to seven planned work zones east of CDA this summer.