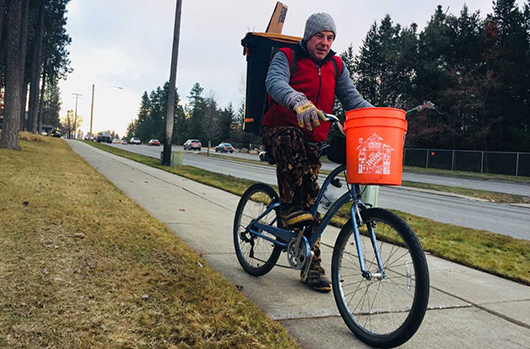 Trash is deposited along state highways year round, but most drivers tend to forget about it during the winter months when snow covers it temporarily.

That doesn’t apply to Richard White, a 63-year-old Coeur d’Alene resident who for nearly three years has independently roved city streets and state highways to pick it up.

White said he retired early from his job with Strate Line Crane & Rigging (now Barnhart Crane & Rigging) due to medical issues, and months later found himself tinkering on a neighbor’s bicycle. Given his health condition, he was surprised when his test trip down the driveway to get the mail worked out.

He decided to get back on his larger bike and gained access to mobility he had been missing. He also found trash on his travels, inspiring him to develop a loop through Coeur d’Alene and even toward Post Falls that covers more than 20 miles.

“I can’t see or walk very well, or even drive, but I can pick up trash,” White said.

White makes the trip every morning on his bike, wearing reflective gear and packing tools like plastic bags, a saw and rolls of wire on his back. His trips are so regular that often he does not even need to stop to pick up trash but rather slows down to catch what piled up in the last day.

He has talked to local business owners who let him throw the garbage he collects into their dumpsters, and now as an official participant of ITD’s Adopt a Highway program, the department’s operations crews will help by collecting the bags from the roadside.

His unusually mobile setup has attracted a lot of attention.

“People are pulling over constantly to ask me what I’m doing,” White said. “Some even offer to help once they learn.”

A testament to his dedication, White’s daily trips also serve as reminder to us all to do our part in keeping communities clean and healthy.