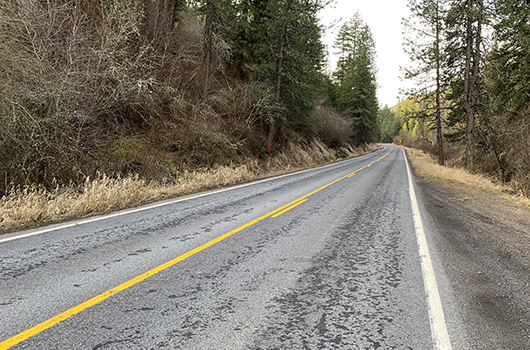 The Idaho Transportation Department is hosting a virtual public hearing to collect comments on a proposal to reclassify several highways in Idaho County as legal for carrying heavier loads. If approved, these highways could support commercial loads weighing up to 129,000 pounds.

KBC Trucking of Kooskia submitted an application to ITD earlier this month requesting the reclassification of the following routes to allow for more efficient transport of logs and lumber to Boise Valley:

The applicant has also requested the use of Old Highway 7 from its intersections with ID-162 and US-95. This route is not being evaluated by ITD as it is under the jurisdiction of the Greencreek Highway District, Union Independent Highway District and Grangeville Highway District.

These highways are currently rated for commercial loads weighing up to 105,500 pounds. Analysis of the state routes by ITD subject matter experts found that allowing heavier loads on the specified highways could be accommodated without affecting safety or pavement conditions.

A similar application was filed by Arlo Lott of Montana in 2015 but included all of ID-13 from Kooskia to Grangeville. After engineering analysis deemed the proposal would not negatively affect safety or pavement conditions, a public hearing was held and received significant public comment. The applicant later withdrew his request.

“While similar to an earlier application, the latest request excludes much of ID-13, which was the most controversial segment,” said Jan Vassar, the Idaho Transportation Board Member representing North Central Idaho. “Staff are approaching this proposal with fresh eyes, and as before, comments received will influence the decision regarding reclassification of the routes.”

The application, analysis by ITD and FAQs about 129,000-pound loads are available at itd.idaho.gov/freight. Comments are being sought until April 12 and can be submitted in the following ways:

The department is required to conduct an analysis and public hearing on all requests to operate 129,000-pound loads on the state highway system before the Idaho Transportation Board makes a final decision. The board could make a decision as early as May.