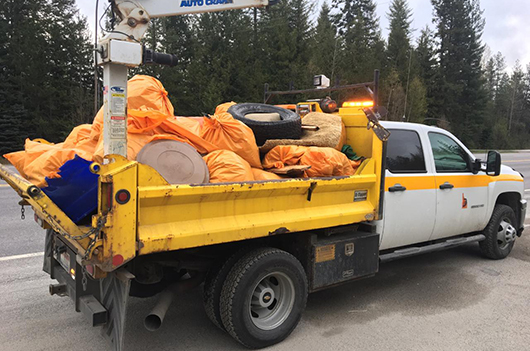 In 1991, the Diablos 4-H Horse Club of Hayden Lake formed an Adopt-A-Highway group and committed to a few years of keeping a two-mile section on US-95 just past the town’s city limits clean from litter. Thirty years later, their passion for beautification remains the same, and that stretch of highway is clear…as are a few other pieces of road as they have occasionally branched out beyond that original commitment.
Last year, COVID prevented the club from cleaning as they typically do. However, over time the group has assembled some impressive numbers, under the direction of Mariam Crumb. Some of the original members have moved along and traded horses for other forms of transportation, but one thing remains the same — Marian.  Crumb has been part of the litter clean-up efforts since the beginning in 1991, but the efforts actually began a dozen years before the “official” formation.
When asked about her sense of devotion to community, she said it was the influence of her parents to do what she could “to make the world a better place.”  Her service has meant organizing 1,340 volunteers in picking up nearly 24 tons of litter.
Marion has allowed us to share that she is 88 years old, has been with the 4-H program for 58 years, has taught horseback riding for over 70 years — 41 years of which have been with North Idaho College. She has an extensive college education in the teaching field, with a bachelor’s degree, master’s degree, and enough college credits for a PhD.
For more information about adopting a stretch of highway in North Idaho, contact Volunteer Services Coordinator Robin Karsann at 208-772-8011. The AAH statewide coordinator is Judi Conner, who can be reached at 208 334-8094.

ITD’s statewide Adopt-A-Highway program organizes the cleaning of Idaho roadsides by volunteer groups. Those groups “adopt” a specific stretch of highway – usually two miles long – and take responsibility for keeping it clean through regular litter patrols, usually seasonal, although winter patrols are frequently postponed until the snow melts to reveal the trash lying beneath.

This is not the only time the group has been recognized by the Idaho Transportation Board. In 2008, the board and District 1 officials presented the group with a certificate of appreciation and a clock fashioned from a sample state license plate.