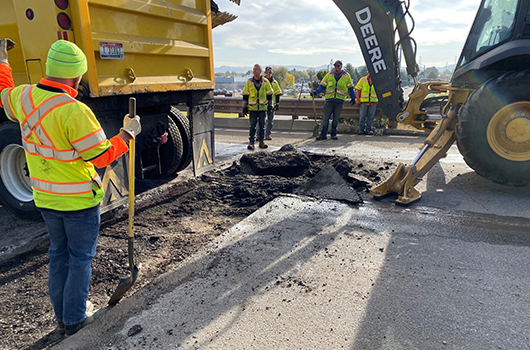 Months of preparation with multiple delays and last minute changes, the I-15 Blackfoot bridge was finally able to get repaired. After years of temporary patches to fill in potholes and disintegrating concrete, crews were able to come together as one big team to help fix the bridge and pulled off one of the biggest traffic control plans ITD has ever done internally.

This project involved many tasks. Of those tasks crews had to sandblast and resurface the bridge deck, replaced guardrail and completed other much needed shoulder work. This repair project was intended to temporary fix the bridge until we are able to begin a full bridge deck rehab project planned in the summer of 2020.

Originally planned for September, the bridgework had been delayed a few times due to project complications and local concerns. After working with the community and local politicians regarding the bridgework and road closures, ITD crews were able to work around the holidays and harvest. In working with the community so closely and openly, the project was incredibly successful and well received by many.

There was close to 10 miles of traffic control setup with crossovers, road closures barricades and numerous flaggers. The crews set the speed limit to 55 mph and with the help of ISP playing a huge role in transitioning and patrolling travelers, the project did not have any crashes…a few close calls but no crashes!

Crews provided 24hr coverage while traffic control was in effect. In closing each side of the interstate down and having such great traffic control, not only were crews able to get in and done with the project quicker but it was significantly safer. By doing this our crews felt safe and gave them the extra confidence that we (ITD) has their back to keep them safe.

As this project ended as a huge success, there was a little bit of a learning curve for the guys to take back for future projects. Learning with even a speed of 55mph to use bigger basses for the candlesticks so they don’t blow over as much and also to adjust exit ramps for the southbound for an easier and clearer transition for drivers.

“It was impressive to see the success of taking one project, bringing in so many people from different areas and working to well together”, said Jared Loosli, “It just goes to show that we can do big things if we’re asked to do big things, we can make it happen!”