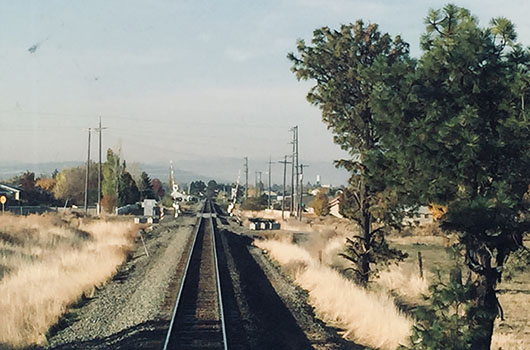 Known as Officer on a Train, the operation provides officers a unique opportunity to work as a team with their counterparts. IOL allows an officer to join train engineers in the engine car for one day to observe driver behavior at crossings so that he or she may radio other officers staged nearby to address unsafe or illegal actions.

As part of the last operation, officers from Kootenai County Sheriff’s Office, Post Falls Police Department and Idaho State Police were able to make contact with 52 drivers. Twelve warnings and 31 citations were given, ranging from speeding to failing to yield.

Six officers in total spent 42 hours at the major crossings in Post Falls, including the Union Pacific crossing at Spokane Street that received warning lights and gates earlier this year as part of an ITD project.

IOL Director Travis Campbell said the effect of those improvements was extremely noticeable.

“Before lunch we would have as many as 75 violations at these crossings in Post Falls,” Campbell said. “That day we didn’t get nearly as many, and I believe those improvements are responsible in part for that decrease.”

Improvements at Spokane Street, as well as more at Grange Avenue in Post Falls, were funded by the federal Rail-Highway Crossing Program.

The program benefits Idaho by providing safety enhancement projects and supporting educational and law enforcement activities. For the last seven years, ITD has administered an average of $2.2 million every year from this program.