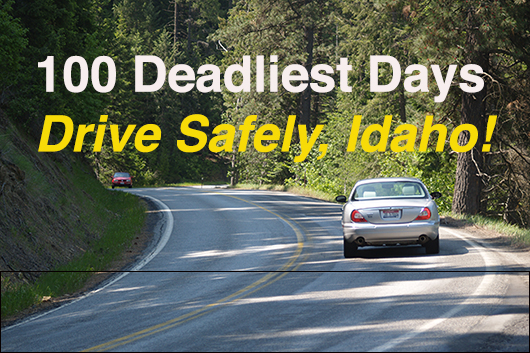 Note: According to data in early October, there were 93 fatalities during the 100 Deadliest Days. The below data was accurate as of publication of this post on Sept. 10, 2019.

BOISE — This summer, 91 people died as a result of traffic crashes according to preliminary data from the Idaho Transportation Department (ITD). This is down from the summer of 2018, when 101 people were killed in crashes during the same time period.

The summer months typically bring with them an uptick in deadly crashes both in Idaho and nationally. Because of this trend, the period of time between Memorial Day Weekend and Labor Day Weekend is often referred to as the 100 Deadliest Days of Summer Driving.

“Summer driving is a big concern of ours,” said Highway Safety Manager John Tomlinson. “This is why we work so closely with law enforcement agencies and other partners throughout the state to promote safe, engaged driving.”

In addition to these grant-funded mobilizations, several media campaigns ran statewide encouraging everyone on the roads to make safe choices.

“It’s so important to get these messages out to the public,” Tomlinson said. “Our law enforcement partners do wonderful work but they can’t be everywhere. If we are going to prevent these fatal crashes, we need drivers to make smart and safe choices.”

100 Deadliest Days at a Glance:*
• The majority of the 91 people killed in crashes were in passenger vehicles.
– 62 Automobile
– 17 Motorcycle
– 6 Other (ATV/UTV)
– 4 Pedestrian
– 2 Pedacycle
• 75 people died in crashes on rural roads and 16 people were killed on urban roads.
• In the 62 passenger vehicle fatalities, 28 people were not wearing seatbelts.
• Failure to maintain a lane was a contributing factor in 23 fatalities.
• Impairment was a contributing factor in 17 fatalities.
• 13 fatalities involved an aggressive-driving behavior.
• 8 fatalities involved inattentive driving.

*Data is preliminary and may be subject to change.