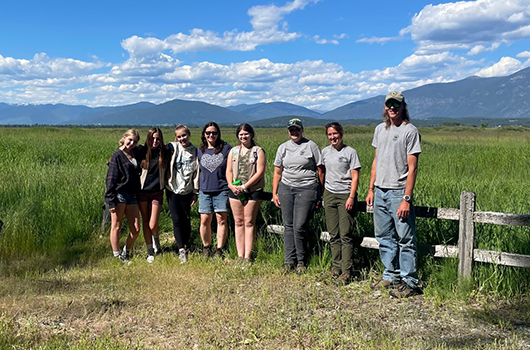 Last month Girl Scout Troop 1806 partnered with the Idaho Department of Fish and Game (IDFG) to install homemade birdhouses near the US-95 McArthur Lake project south of Naples.

Project Manager Carrie Ann Hewitt has consulted IDFG biologists through the design of the project, which includes realigning one mile of the highway near the lake to make the existing curves safer for drivers and to elevate the highway where it dips down to the water. Elevating US-95 will also allow wildlife to pass underneath to access the IDFG McArthur Lake Wildlife Management Area.

The project will be constructed in 2023 and 2024, with tree thinning work this year to prepare for the realignment. Hewitt is a co-leader for the troop, which had been researching the state bird—the mountain bluebird—and the troop reached out to IDFG to see about improving habitat.

“Mountain bluebird populations are struggling,” Hewitt said. “The girls found that cowbirds actually swap out eggs with the bluebirds, and the bluebirds unknowingly hatch the wrong offspring.”

The troop built birdhouses with entrances too small for the cowbirds to prevent that from happening, and IDFG suggested that they install them near McArthur Lake due to the recent thinning, along with another site near Boundary Creek.

Hewitt’s daughter Allison, 14, and fellow troop members camped in the area and with help from IDFG installed 18 birdhouses. This project will earn them their Silver Awards, which is one step away from the Gold Award, comparable to the Eagle Award for Scouts BSA.