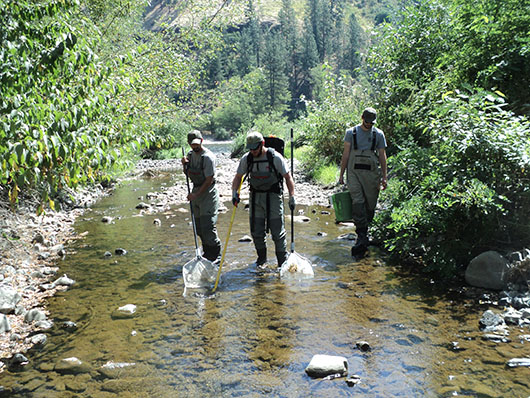 Plenty of folks fish along the Lochsa River that flows beside US-12 in north-central Idaho, but not many get to electrofish.

Electrofishing is a technique used by agencies such as Idaho Fish and Game (IDFG) to safely survey fish. It involves sending electricity into the water to temporarily stun fish to easily capture them with nets.

“It’s a way to sample fish without killing them,” said Joe DuPont, IDFG fisheries manager for the Clearwater region. “It allows us to get our hands on them and learn more.”

At the request of ITD, IDFG recently sent fisheries technicians to electrofish Maggie Creek, which flows under a bridge that is currently being replaced. They were able to collect important data* by surveying the fish before transporting them further upstream.

DuPont said as state agencies IDFG and ITD work together to share resources and expertise to save the state money.

ITD purposefully stages in-water work such as pier removal during a fish window, or a time when impacts to fish will be at its lowest. For District 2, that window is from July 15 to August 15.

“One month can be a tight timeframe for agencies to work within,” D2 senior environmental planner Shawn Smith said. “We appreciate IDFG’s continued partnership as we work to enhance the safety of the highway for the public while limiting impacts to the area’s valued resources.”

Following electrofishing, Smith said crews were able to use cofferdams to isolate a section of the stream without trapping any species. For the remainder of construction, fish will continue to swim upstream unimpeded.

Fish Creek Bridge, which is also under construction, will experience similar efforts by IDFG and ITD in the coming weeks.