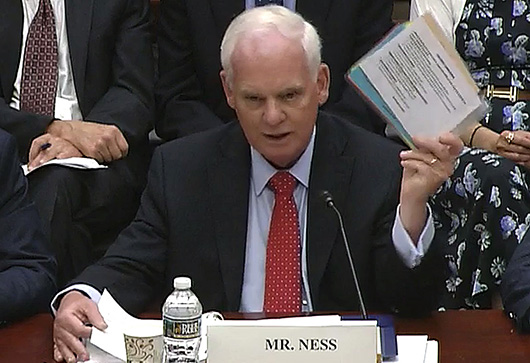 ITD Director Brian Ness presented to the Science, Space and Technology Subcommittee of the U.S. House of Representatives on July 11 regarding the importance of research and innovation in maximizing transportation budgets.

It was likely the most significant national stage for an ITD Director since Darrell Manning was the national American Association of State Highway and Transportation Officials (AASHTO) president in the early ‘70s.

Ness, who also serves as the Chairman of the AASHTO Special Committee on Research and Innovation, spoke to the Subcommittee about the many benefits that come from investment in transportation research. Ness, along with a few other state DOT chiefs, advocated for more federal investment, saying it would serve to multiply those positive results.

He added that ITD used federal research dollars to help develop a new concrete mix called ‘High Early Strength Concrete’ for use in accelerated bridge construction. “That study proved the new mix can replace Ultra-High Performance Concrete, which costs $10,000 to $15,000 per cubic yard, and reduce the cost to $800 per cubic yard –a cost reduction of more than 90%.”

“FHWA has a good program, but its funding level – just $6 million annually – is rather low,” he explained. “Universities ought to be the best sources for carrying out fundamental research, but matching requirements and program directives seeking near-term solutions appear to be resulting in a preponderance of applied research that is crowding out fundamental research.”

Director Ness concluded his testimony with one last push for funding:

“By coordinating, collaborating, pooling and leveraging time and money, and utilizing the combined knowledge and expertise of our diverse research community, we are making significant contributions and improvements to the advancement of our nation’s transportation system,” he explained.

Ness explained that investment in research, development and subsequent innovation is not only a wise use of taxpayer money, but also helps these states find ways to build or repair roads and bridges faster and more efficiently.

Rep. Haley Stevens, D-Mich., the subcommittee’s chairwoman, introduced the topic by saying “Investing in research and development is critical to developing smart, resilient, and cost-effective transportation infrastructure for the future.”

Quotes are courtesy of AASHTO.