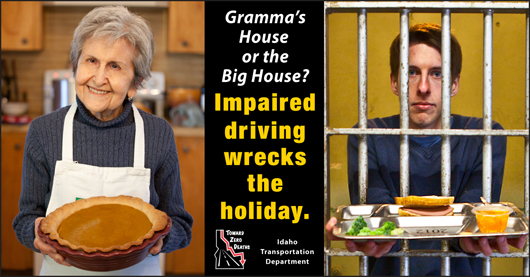 BOISE—Thanksgiving is a time for food, family, friends, and for many of us, travel. It’s also one of the deadliest times of year on our roadways because of drunk and impaired drivers.

That’s why this Thanksgiving weekend, the Idaho Transportation Department’s (ITD) Office of Highway Safety is working with the National Highway Traffic Safety Administration (NHTSA) to remind everyone: If You Feel Different, You Drive Different. Drive Sober During Thanksgiving.

“We know that for many folks, holiday celebrations involve some adult beverages,” said Highway Safety Manager John Tomlinson. “It’s okay for adults to choose to have a drink with their Thanksgiving dinner. What’s not okay is getting behind the wheel after drinking.”

In fact, during 2017, more than one out of every three traffic fatalities during the Thanksgiving Holiday period involved an alcohol-impaired driver.

Excessive drinking is prevalent over Thanksgiving due in part to cultural phenomenons like “Blackout Wednesday,” that highlights and even encourages the heavy consumption of alcohol throughout the holiday weekend.

“It’s a combination of a couple different things,” said Tomlinson. “We see a lot of young adults coming home for the holiday who choose to catch up with friends at a bar. There are also people who plan to cook all day Thursday who choose to go out for dinner and drinks on Wednesday.”

Tomlinson offered the following tips to stay safe on the road: