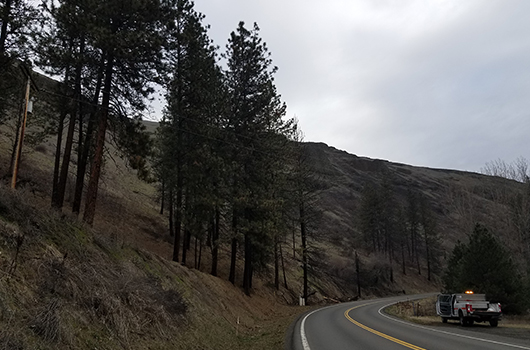 Trees along Idaho Highway 162 near milepost 20 will be removed in the coming weeks to improve safety for drivers, with work scheduled to start today.

Maintenance crews will gradually remove trees that appear to be dead or dying within this road section. The highway will be reduced to one lane and closed completely for approximately 15 minutes each time a tree is dropped.

Crews are generally expected to work between 9 a.m. and 2 p.m. The brushing project could take up to two weeks to complete between snow storms, so drivers are advised to pay attention to signs in the area and to check 511.idaho.gov for specific timing of impacts.

This particular section lost several trees during a storm in early February that left one ITD operator injured after a tree fell onto his plow truck as he stood next to it. That employee, while initially released from the hospital after the incident, is still recovering at home.

“Recent events remind us of the dangers of dead trees close to the road,” Foreman Lee Linabary said. “This is one of several sections of highway that has been on the list for brushing activities ever since the 2015 fire near Kamiah.”

An estimated thirty trees will be removed in the initial area, but drivers should expect more trees with the potential to fall onto highways during storms to be cleared along several more miles of ID-162 near Kamiah and ID-62 near Craigmont this summer.