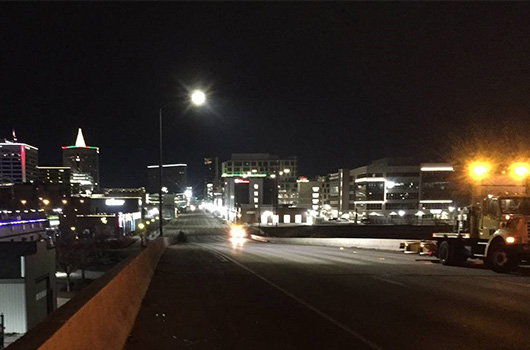 In total, 537 fixtures were upgraded on the state highway system across the county. These lights are often installed on freeway ramps, signalized intersections, or underneath bridges.

“LED technology is superior to the old sodium lights in many ways,” said Justin Price, Traffic Manager for ITD’s Southwest Idaho Office. “They are cheaper to operate and maintain, and they have a longer life span. They also produce a whiter light, which improves visibility to drivers.”

LED offers several economic and ecological advantages over high pressure sodium (HPS). The lifespan of an LED can be up to four times longer than HPS, meaning less physical waste. HPS bulbs cast light in all directions, while LEDs are restricted to 180 degrees, making them more efficient at lighting what we want lit. HPSs need to be regularly monitored as they age, whereas LEDs are near-bulletproof, requiring fewer trips in the maintenance truck.

The cost to replace these fixtures was $450 each. ITD has started to make these upgrades for the street lights in Canyon County as well and plan to have them completed over the next two years.