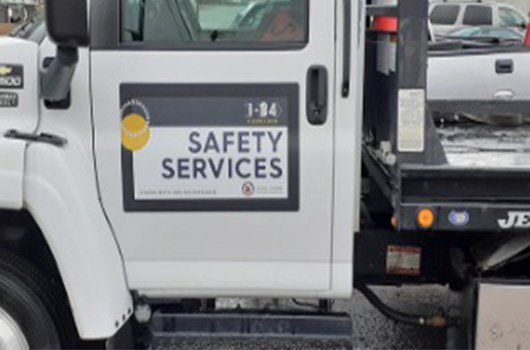 A pilot program on I-84 construction zones designed to increase efficient movement of people and commerce won a leadership award for enhancing safety through a key corridor.

The Community Planning Association of Southwest Idaho (COMPASS) selected the Idaho Transportation Department (ITD) Safety Patrols Program on I-84 as the winner for the “Leadership in Government, Canyon County” category for their annual Leadership in Motion awards.

The Safety Patrols pilot program was an idea introduced by ITD Emergency Management Planner Neal Murphy after seeing similar programs in other states. Murphy pitched the program to GARVEE Managers Amy Schroeder and Mark Campbell as a way to increase safety for emergency responders, construction workers, and the traveling public while ensuring traffic was able to flow at a steady pace.

“Mark and I coordinated with ITD Contracting Services to build a contract and worked through numerous issues before getting it to the Tow Association.” Murphy explained. “We also coordinated operations with Idaho State Police, ISP dispatch, and State Communications ensure ITD had a sound product to serve the traveling public. It was a team effort to make this happen and hopefully it will be a model for future Idaho construction projects in large cities.”

The service operates during weekday peak hours and as needed for special occasions such as traffic shifts or closures, holidays and public events. The services include assisting with breakdowns, accidents and law enforcement traffic assistance. Craig Parker is the primary contractor operating the tow. His goal is to remove the vehicle and occupants from the work zone and take them to a safe location off the interstate to enhance their safety while reducing traffic delays.

From the time the service began in December 2019 through August 2020, the Safety Service Patrol has completed 154 assists/tows. This includes 81 breakdowns, 44 accidents, and 29 law enforcement assists with zero serious injuries or stuck-by events.

In addition, ISP’s increased presence in this high priority construction corridor has resulted in an improvement in officer response times in the work zone. ISP has made 1,613 contacts and traveled 17,568 miles since the beginning of construction.