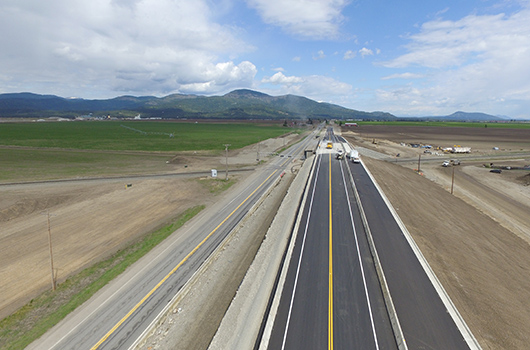 The first of two bridges over the railroad on Idaho Highway 41 north of Hayden Avenue will open tomorrow. Work on the overpass began in June of 2020 and completing this structure is a major milestone in the effort to expand the highway to four lanes between Post Falls and Rathdrum.

With the bridge ready for use, traffic on ID-41 will shift from the existing roadway to the newly paved lanes between Prairie Avenue and Wyoming Avenue.

“Opening this first bridge is critical to moving on to the next phase of the project,” ITD Project Manager Mason Palmer said. “Now we can start building the second bridge and continue upgrading intersections.”

Immediately following the opening of the bridge, the closure of Hayden Avenue east of ID-41 will be lifted, but west of ID-41 the road will close until early August. Lancaster Road east of ID-41 will also close for that same timeframe. Local detours will be posted.

Intersections throughout the corridor will be partially closed during construction to allow crews to add capacity, update signals or install turning restrictions. Drivers are encouraged to sign up for email updates at itdprojects.org/id41corridor.

View specific plans at each intersection.

Paving operations have not yet begun for the southern half of the project, which kicked off earlier this year. Crews are currently in the process of relocating utilities and building the base of the future roadway.

“Generally speaking, we will build a new set of lanes to the east, switch traffic over to those lanes, and then rebuild the existing roadway,” Palmer said. “What drivers have historically traveled on will become two southbound lanes, and the two new lanes will carry northbound traffic.”

Traffic conditions and progress will vary throughout the corridor, but all work is scheduled to be complete in the fall of 2022. Improvements total $51.5 million, with another $5.7 million contributed by the cities of Post Falls and Rathdrum.