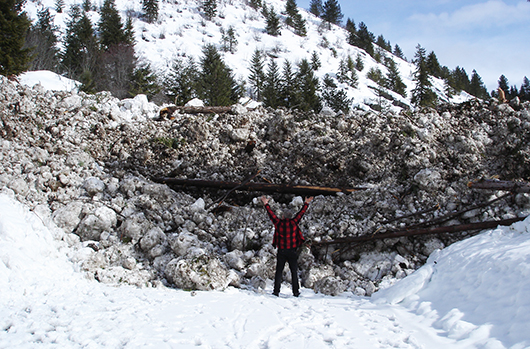 An avalanche hasn’t reached US-12 east of Kooskia since 2008, but another weather station placed in the corridor this fall will help staff experts better forecast when the next one could happen.

“You can’t just come up with a cookbook formula for avalanches,” said Bill Nicholson, the leader of ITD’s Avalanche Crew that was formed in 2000. “There are infinite number of variables. We evaluate the strength of the snow that’s on the ground and then evaluate the incoming stressors like rain, wind, snow and temperature fluctuations.”

The new station, placed at 3,639 feet, will collect information on such stressors every hour to be analyzed by the team in Lowman. The team mainly spends their time monitoring Idaho Highway 21 between Lowman and Stanley, which is nationally ranked as one of the most avalanche-prone highways and sees 20 to 50 avalanches reach the pavement each year.

Over the last decade US-12 has been closed fewer than ten times due to a considerable hazard and has a return interval of every five or ten years.

“That’s a hard number to understand,” Nicholson said. “There’s no guarantee that you will have an avalanche in that time frame. You could have two avalanches in one year, or you could have no avalanches for several years.”

Still Nicholson’s team will visit the region to maintain the stations at Powell and Bald Mountain and travel to the pass to be on standby during extreme weather events.

The steep slopes from milepost 125 to 138 are the most concerning, with gates installed at the zone’s edges. Each fall Nicholson leads training on avalanche beacons and protocol for closing the highway for Foreman Mark Schuster and his crew.

“Every operator wears a beacon that transmits his or her location while on duty,” Schuster said. “In the event that an employee gets caught in an avalanche, others will be able to use their own beacons to find them, even buried in 50 feet of snow.”

With data from the weather stations—and the one that will be installed next year at Castle Butte—experts aim to better forecast when it is time to close the highway.