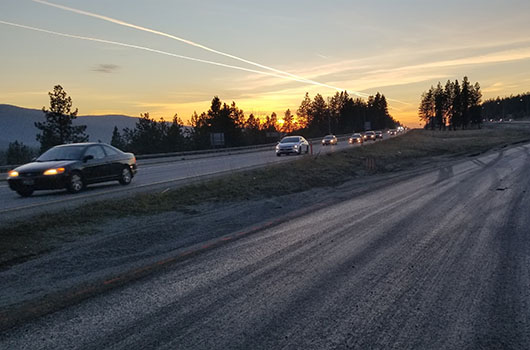 Interstate 90 will be reduced to two lanes at night next week while crews prepare for continued construction this year to repair bridges over Huetter and Atlas roads.

Construction in the area last year built crossovers that will allow all four lanes to remain open during daytime work, which is scheduled to begin the last weekend in March.

Later this year, crews will work on the other halves of the bridges, requiring westbound lanes to be divided and all drivers heading to the rest area will need to take the right lane. Both lanes will have access to the Idaho Highway 41 exit during that configuration.

As part of this project, more overpasses in Post Falls will receive a sealing treatment. This work will be done at night and requires single-lane closures for a few nights per bridge.

At this time the only planned daytime closures on the interstate are scheduled for work later this spring to gain more accurate measurements from the weigh-in-motion concrete slab west of the ID-41 interchange by creating a smoother transition. During this time, one eastbound lane will be closed for two weekends with some nighttime lane closures in between.

All work is expected to be completed by early July and will be followed by another project to reduce rutting from the Washington-Idaho border to the Northwest Boulevard exit. Resurfacing will last until September.