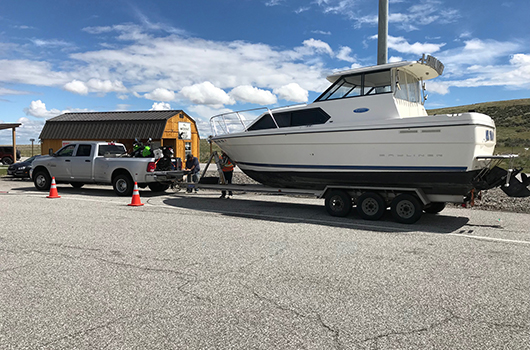 Boat check stations across the state are now open, including the one on Interstate 90 near Cedars, where inspectors found the greatest number of contaminated watercraft in 2018.

Primarily positioned near state borders, stations check for aquatic invasive species (AIS), such as zebra mussels, being transported between watersheds. Key to this effort is signage provided by the Idaho Transportation Department to advertise inspection opportunities and patrols by local law enforcement to ensure motorists remember to stop.

The stations are part of a larger effort by the Idaho State Department of Agriculture (ISDA) to prevent the spread of AIS.

“The spread of aquatic invasive species like the mussels would threaten the Idaho we know and love,” said Nic Zurfluh, a section manager for ISDA.

Invasive mussels are easily transported, and once attached to an area, can quickly take over and are hard to eradicate. Colonies clog pipes in water systems, threatening hydropower and irrigation for food, as well as municipal water supplies. When they take over a lake, it can quickly lose its recreational value.

“If quagga or zebra mussels were to infest Idaho’s waters, as they have done in other states, it could cost the state nearly $100 million annually in damage and lost revenue,” Zurfluh said.

Invasive mussels are thought to have been carried over by transoceanic shipping containers through ballast water in the late 1980s. They started in the Great Lakes, and since then, they have been transported down the Mississippi Basin and to the west.

Shortly after the invasive mussels were found in Arizona’s Lake Mead in 2007, Idaho began monitoring lakes and rivers.

The Columbia Basin is the remaining major watershed in the United States that has not been infested, inspiring a regional effort between Montana, Oregon, Washington, Idaho and even Canada to share data, outreach strategies and prevention efforts.

Fifty fouled watercraft—ranging from boats to kayaks to barges—were found across the state last year through 110,000 inspections, though none were carrying viable organisms. To date this year, 10 fouled boats have been found.

“The opportunity for prevention is alive and well,” Zurfluh said.

For those recreating in the Coeur d’Alene area, note that the Coeur d’Alene River and the St. Joe River are part of different watersheds, requiring extra care between trips. More information is available at: http://invasivespecies.idaho.gov/watercraft-inspection-stations.