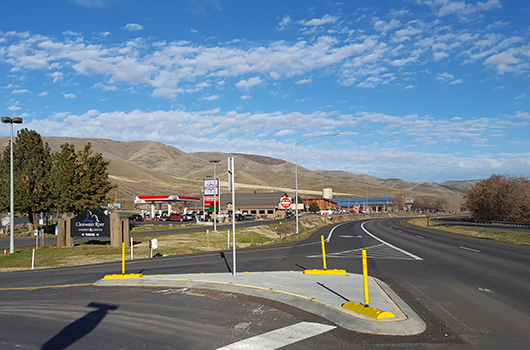 Crashes near Aht’wy Plaza have become too frequent of a sight for those who drive past them or see them on the news. Too many of them have ended with a loss to our community.

While it is not a new area of concern for drivers on US-12 near the Clearwater River Casino and Lodge, many have been motivated by two recent deaths to offer their own solutions.

Several have been considered by the Idaho Transportation Department as the area developed, but these inquiries provide an opportunity to clarify why certain actions have or have not been taken.

Although this seems to be the easy answer, lowering the speed limit may not be the best solution.

Speed limits are generally determined by how fast drivers comfortably and naturally move in the area, usually set at a pace described as what is “safe and reasonable.” They are safest when the majority of drivers are traveling the same speed, which is why ITD conducts speed studies to determine the speed at which 85 percent of drivers are traveling at or below before establishing a limit.

Speed studies are typically prompted by changes to the area, including new businesses opening and fluctuations in traffic patterns, as well as requests to adjust any speed zones. Five studies have been conducted near the casino since its opening by both the Nez Perce Tribe and by ITD, with the earliest study occurring in 1997 and the most recent in October 2018. ITD has also met with the Idaho State Police multiple times to analyze crash data.

To date, these discussions and drivers’ speeds have not supported changing the limit, and without either a serious commitment of law enforcement resources or a serious change in roadway conditions, reducing the speed limit would not be effective in improving safety or slowing traffic to or from the area.

While vehicles moving at lower speeds would impact each other with less force, that would only be the case if all drivers were moving at that lower speed limit. But if one driver was following the lower, posted speed limit and another was moving at the natural pace allowed by the road, additional conflicts could arise.

The greatest concern is that some drivers would obey the slower posted speed limit and others would not. As these drivers encountered slower vehicles, they would likely make more abrupt and unpredictable movements (like last-minute lane changes), which could increase the crash rate.

Most crashes at the entrances have been related to exiting drivers failing to yield to oncoming traffic when turning left. Variation in vehicle speeds through the area would likely make that left turn tougher—with some vehicles approaching at lower speeds and others at higher speeds, it would be difficult to judge a safe gap in traffic.

ITD has repeatedly investigated the safety and appropriateness of the posted limit, with each study supporting the current limit to prevent a possible increase in crashes.

If most crashes are related to drivers experiencing difficulty turning left, then it is reasonable that a signal could improve safety.

Just as speed limits are set a certain way based on data collection and analysis, signals are normally installed at specific locations once shown to be warranted.

Signal warrants are based on a variety of engineering factors, including how many vehicles make which turning movements. Although an engineer’s judgment can influence the final decision, these warrants are the primary basis for signal installation to ensure that traffic continues to flow smoothly.

Signals should only be installed when warranted as they typically increase certain kinds of crashes, including rear-end collisions.

Data collected from the entrances in 2012 did not support installing a signal or merit interrupting the flow of traffic on the highway.

ITD uses access agreements all over the state to ensure that new or changing developments near highways do not create safety or mobility issues for drivers.

In the case of the casino, access to US-12 was initially provided by a county road which already had an agreement in place. When the county transferred the road to the casino in 2000, it altered its use, prompting a fresh access agreement.

A traffic impact study performed near the time of the development of the access agreement proposed an interchange as the ultimate solution, especially given expansion plans for the facility. It also outlined smaller improvements that could be implemented in the meantime to keep up with the growth of the facility and traffic to it while design continued on the interchange.

The tribe agreed to these terms, giving ITD the authority to restrict access if the commitments were not met. In the intervening years, some phased improvements—such as lighting, turn bays and acceleration lanes—have been constructed, but the final commitment remains unfulfilled.

Rather than close access and hinder productive relationships, ITD chose to work as a partner to the tribe. The department has remained involved in the design process, providing input on the development of the interchange to guarantee it will meet standards when incorporated into the public transportation system. ITD has listened to the tribe’s concerns, granted extensions when necessary and helped aid environmental discussions needed to complete the proposed interchange.

Although development of the interchange has been delayed for a few years as the tribe encountered environmental issues common to this type of project, they have funded other improvements proposed by ITD in the meantime, including the construction of a concrete island and the placement of additional signage in the area in the last year.

In January, a team of diverse professionals will meet to examine the data—all refreshed in the last month—as well as driver behavior to identify any and all solutions.

The best solution remains—and has always been—an interchange, but the road safety audit aims to determine effective steps that can be implemented immediately. ITD will work with the tribe to carry out any viable solutions the team recommends.

The interchange’s design is set for completion next winter, with construction following the tribe’s procurement of funds.

Construction of the interchange will reduce the possibility and frequency of crashes. Engineering and enforcement can help improve safety, but only engaged drivers can truly ensure safety while accessing and using the highway.