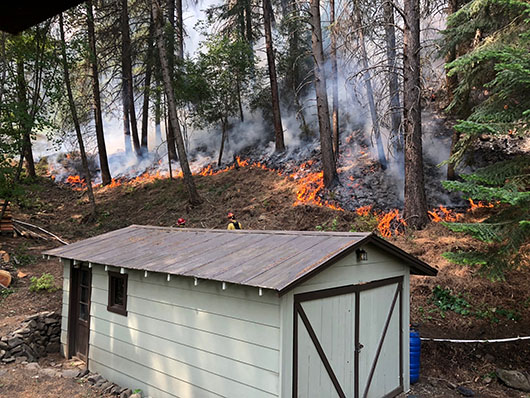 A fire along US-95 near Riggins has sparked a partnership between ITD and a Northern Rockies incident management team to enhance safety for travelers in the area.

The fire began near milepost 184 on July 23 and spread quickly through the corridor, according to Molly Cropp, a public information officer for this team of multi-agency professionals mobilized to address long-term incidents.

No structures have been lost, but this human-caused fire is still under investigation and is currently 42% contained. More than 450 emergency management professionals have mobilized into the area, with 12 hand crews, 21 engines and four helicopters working to protect citizens, their homes and the infrastructure they rely on, Cropp said.

That infrastructure includes the highway, which is currently experiencing increased traffic as crews drive between the fire and their base camp at the rodeo grounds north of Slate Creek. Safety concerns for crews, along with low visibility, prompted a meeting between the management team and ITD.

“With the fire initially visible from the highway, there were concerns of collisions between crews and regular commuters, especially with all of the smoke,” ITD north-central Idaho Operations Manager Bob Schumacher said. “We’ve decided to reduce the speed limit from 65 mph to 45 mph for the duration of the fire or until visibility improves.”

Right now travelers should expect large trucks making turns onto, and out of, less-used routes. Cropp, along with Schumacher, encourages the public to remain engaged while driving and to avoid stopping on the highway to take pictures.

“We’ve also been relying on air resources because the terrain around the fire is so steep, and we can’t get people in there,” Cropp said. “The speed restriction through the fire area has been really helpful; our helicopters have been flying over the highway to access nearby lakes.”

This time of year, and especially in this area, it is also important to understand the fire restrictions that are in place and to use common sense.

“Flashy fuels grow next to the highway, so don’t throw any cigarettes out the window,” Cropp said. “What starts as a small brush fire can quickly turn into a big fire.”

To learn more about the Rattlesnake Fire, view daily updates at the InciWeb page.