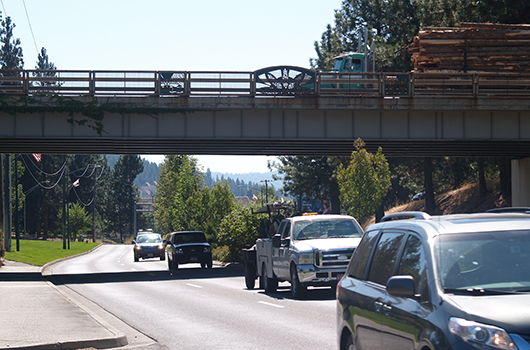 Several bridges in the Coeur d’Alene area will be repaired this summer, with work scheduled to begin first on the US-95 bridge over Northwest Boulevard.

Construction will start Monday, April 4, to paint the steel railing and remove and replace the surface of the US-95 structure. During the two months of work, southbound drivers will not be able to use the left turn lane on the bridge to access downtown via Northwest Boulevard.

As part of this project, other bridges will also be improved this season:

Impacts will vary by bridge and by type of work, with some work zones scheduled to be in place for a few days to a few months.

Later this summer, a different project will also address repairs to another six bridges in the Coeur d’Alene area, including the Spokane River Bridge on US-95.

As more work zones begin to affect traffic, drivers should check 511.idaho.gov to plan their commutes.