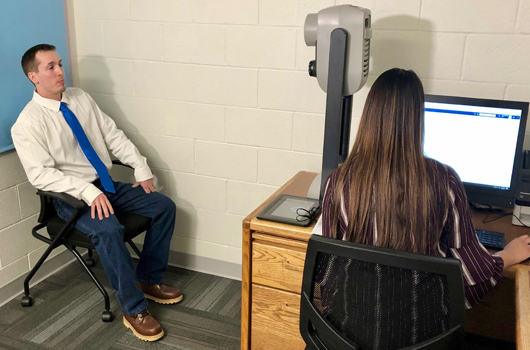 It’s already been a busy few months of 2019 for the DMV and we’re highlighting a couple initiatives you may have been hearing about. The first is a partnership with the Idaho Department of Correction (IDOC)—and the second is a renewed push to ensure all Idahoans know what the Star Card is–and how to get one so you don’t get left behind.

Previously, released inmates were transported by IDOC to county Sheriff’s offices to receive identification cards where lobbies are often full. The new program is a cooperative effort between IDOC and ITD. Idaho Rep. Melissa Wintrow, D-Boise, and Interfaith Sanctuary Director Jodi Peterson were proponents of the program.

Dominic Hinton is getting out of prison in July after about 18 months. While incarcerated, he says his ID expired. “I am very nervous to get out but having an ID is another step that’s going to be easier to get a job, easier to get everything else done when I get out there,” Hinton said. Hinton is shown in the photo getting his picture taken by an IDOC employee for a state identification card.

“Having an ID already is really going to help out. I can just go to an employer and say hey, I want to work, here’s an ID right away.”

Many inmate’s driver’s licenses or identification cards expire, are lost or destroyed while in prison. IDOC case managers work with the inmates months before their releases to obtain the proper documents to qualify for an identification card.

“It’s investing in the success of the people leaving prison,” Deputy Chief of Prisons Ross Castleton said. “If you can’t get a job, you fall back onto the things you did before. That is how people return to prison.”

“The amount of work Rep. Wintrow and Jodi Peterson did advocating for this to happen, and the willingness for IDOC to work with ITD, it just means a lot,” DMV Administrator Alberto Gonzalez said. “It shows you government can work together to make a difference.” 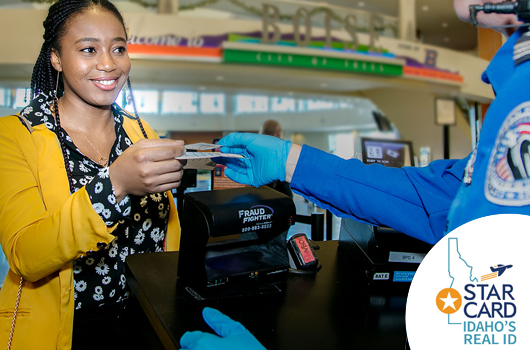 Let’s switch gears to another huge DMV initiative—empowering Idahoans with the information they need about the Star Card.

A year after Idaho began issuing the Star Card, Idaho’s Real ID, five percent of Idahoans have applied for the card. Without it on a driver’s license, citizens won’t be able to board a plane or enter a federal facility.

Beginning Oct. 1, 2020, the Department of Homeland Security will require a Star Card, or other approved credential such as a passport, to get through security at airports, courthouses, and military bases.

“Unless you have a passport or another compliant identification, you will need to get a Star Card – Idaho’s Real ID to fly on an airplane or visit federal buildings,” Governor Brad Little said. “The last thing I want is for a family or business traveler to miss a vacation or an important work trip because they didn’t get their Star Cards.”

In addition, Governor Little said, “Getting your Star Card soon instead of waiting until the last minute will help minimize long lines at DMV offices.”

To raise awareness of the deadline, the DMV is launching a new multi-faceted campaign consisting of videos, advertising in Idaho airports, and on social media and travel sites. The campaign message focuses on the Star Card being your “license to fly” and getting it now so “you don’t get left behind.”

The DMV has developed a helpful “Add the Star” online tool the public can use to determine the documents they need to bring to obtain a Star Card. It is also mailing renewal postcards to Idahoans whose driver’s licenses or IDs are going to expire, urging them to consider getting a Star Card. “The need for a Real ID is here. We are asking Idaho citizens to please go to your local county DMV office as soon as possible to help avoid long lines as we get close to Oct. 1, 2020.” said Idaho Transportation Department Director Brian Ness. “Wait times are back to normal at all offices across the state. To make the renewal process for getting a Star Card easy, visit the ITD website first to ensure you come to your DMV office with the right documents to avoid multiple trips.”

Governor Little also teamed up with ITD to share a message about the Star Card through a new public service announcement. You can view it here. Additionally, there will be much more information about Star Card shared throughout 2019 and 2020–to ensure all Idaho citizens are empowered with the information they need before the October 2020 deadline.