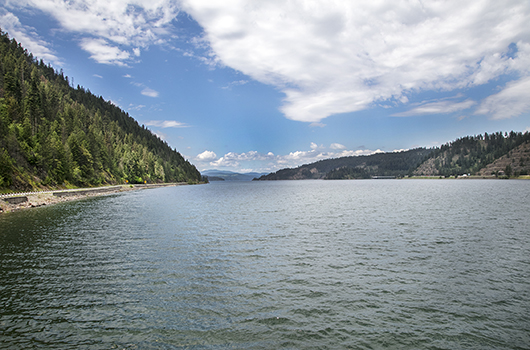 With a third construction project scheduled to start on I-90 east of Coeur d’Alene this Monday (June 22), drivers should expect delays on their way to access the river or head south on the Lake Coeur d’Alene Scenic Byway. These projects will collectively repair several bridges and restore the interstate’s surface, improving safety and the driver experience.

Work to resurface the interstate from Blue Creek Bay to the bottom of the Fourth of July Pass will extend the existing work zone at the bridges over Blue Creek Bay. Include the replacement of the bridge over Pennsylvania Avenue on the edge of town and drivers will encounter miles of orange barrels as they head east.

“Once traffic is crossed over for the bridge repairs at Blue Creek Bay, drivers will stay on that side of the interstate until the end of the paving project at the bottom of the pass,” ITD Project Manager Kyle Schrader said.

“The closest places to turn around will be the Mullan Trail interchange to the west and the interchange at the top of the pass to the east,” Schrader said. “For the smoothest travel plans this summer, drivers should check for construction delays or detours on the 511 app before heading out.”

“We will then go through this process again, just in the opposite direction,” Schrader.