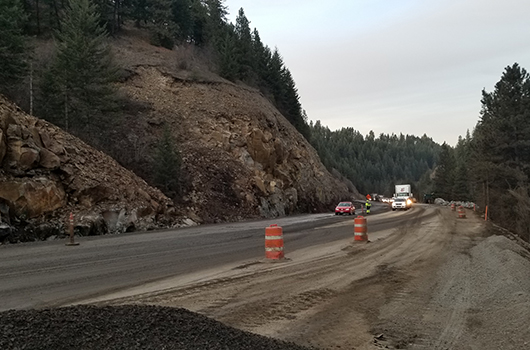 Work that begin in April to extend the passing lane on US-95 near Winchester will be mostly complete for the season after crews finishing paving on Friday, November 15.

Paving operations are currently underway, with the highway reduced to one lane of alternating traffic. Once paving is complete, the speed limit will revert to 65 mph but could be adjusted as necessary throughout winter.

Miscellaneous work will continue after paving but all work is expected to be done by Thanksgiving.

“This year, we were able excavate enough rock for the southernmost mile of the passing lane and upgrade five culverts to be more fish friendly,” said Curtis Arnzen, ITD’s resident engineer for the project. “Construction next year will be similar to what it was like this year, though there won’t be as many blastings scheduled.”

Construction will resume in March 2020 to finish excavating and paving the three-mile passing lane and replace the remaining four culverts. The passing lane will not be open to the public until the entire project is complete next fall.

The existing passing lane from milepost 289 to milepost 290.5 was constructed in 2016. By 2027, ITD plans to have a completed passing lane between Winchester and Culdesac for an estimated $50 million.