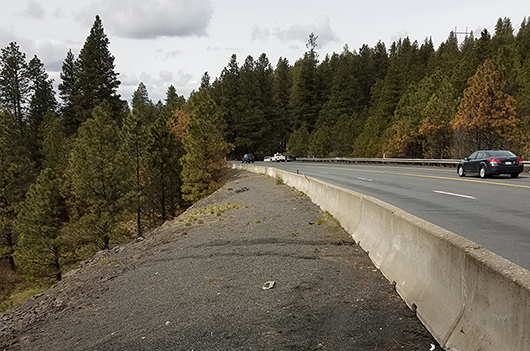 Next week, contractors will start making improvements to US-95 in Moscow in advance of a large paving project this summer.

Beginning Monday, May 13, pedestrian facilities at Rodeo Drive and Pintail Lane will be brought up to current standards. Shoulder closures will be in place along with pedestrian and bicycle detours.

In early June, a section of road at the intersection of US-95 (South Washington Street) and East First Street will be resurfaced. Drivers can expect one lane open during the work. Pedestrian and bicycle detours will be in place as necessary.

As part of this project, Idaho Highway 66, from its intersection with US-95 to the Washington border, will be repaved in mid-June. Flaggers will be stationed at the intersection to guide traffic movements onto ID-66, which will be reduced to one lane.

In late June, contractors are scheduled to repave more than five miles between Rodeo Drive in Moscow and Four Mile Creek in Viola, including Moscow Mountain. During paving, US-95 will be reduced to one travel lane, with two lanes possible over the mountain.

Earlier work in May and July at Moscow Mountain will include installing a wall to help stabilize the hill, replacing the concrete guardrail on the west side and relocating a wildlife sensor. One lane will be closed for that work.

All work is expected to be completed by Poe Asphalt Paving, Inc. in late July for an estimated $2.3 million. Learn more at itdprojects.org/us95moscowtoviola.