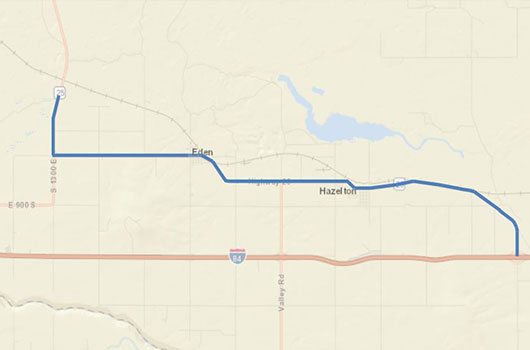 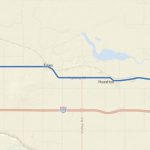 Construction is expected to begin Tuesday (June 1) on Idaho Highway 25 in Jerome County. This work will rehabilitate the roadway from milepost 18, approximately four miles west of Eden, to Interstate 84.

“This project will encompass approximately 13 miles of ID-25,” ITD Resident Engineer John Baxter stated. “Although our work zone will be near Eden and Hazelton, construction operations will not occur within the communities.”

Construction will involve pulverizing the surface of the roadway, adding cement and then compacting materials before placing a new surface on the highway. This will reinforce the existing base and extend the life of the roadway.

While work is underway, the highway will be reduced to a single lane. Motorists are advised to watch for flaggers and pilot cars that will be present to direct traffic through the work zone.

This $3.9 million project is expected to be complete late summer. The primary contractor is Western Construction, Inc. 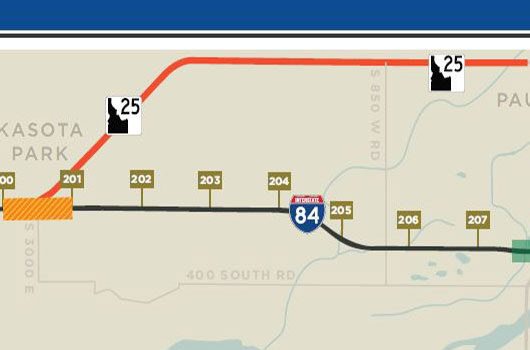 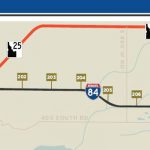 Exit 201 on Interstate 84 will close on Tuesday (May 18) for ten days as construction begins to resurface eight miles of Idaho Highway 25 from the I-84 interchange to Paul.

All ramps at Exit 201 and ID-25 underneath the interstate will be closed from May 18 through May 27* to allow for crews to reconstruct the roadway. Drivers on I-84 will need to use Exits 194 or 208 during this time. County roads will not be affected.

“Closing the ramps and a small section of ID-25 underneath the interstate will allow our crews to safely and efficiently complete work in the area,” ITD Project Manager Sam Purser said. “This project will provide a better driving surface for motorists and help extend the life of the roadway.”

Work on ID-25 north of the interchange will also start on Monday (May 17). This work will reduce the highway to one lane during working hours, which are scheduled Monday through Friday from 6 a.m. to 6 p.m. Outside of working hours, all lanes will be open.

Construction will take until August to complete.

*This closure was originally expected to take place from May 15 through May 25 but will now occur at a later date. Residents may have received a postcard with the original anticipated dates. 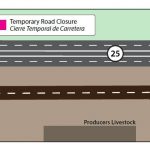 Early November, work is expected to begin on replacing the N Canal Bridge on Idaho Highway 25 east of Jerome. Built in 1956, the current bridge has reached its life expectancy. The new structure will be both longer and wider than the current bridge, and also support heavier load capacities.

“The new bridge will facilitate space for construction of a future pedestrian walkway,” said ITD Project Manager Tom Logan. “It will also allow for existing utilities to be placed underneath the structure.”

As part of the project, the adjacent ID-25 approaches will be brought up to grade as well.

“Updating the grade of the bridge, along with the northbound and southbound approaches, and increasing the width will improve safety for the traveling public,” stated Logan.

Traffic on ID-25 will remain open but reduced to one lane in each direction throughout the duration of the project. Barrels will be in place to safely guide motorists through the work zone.

Click here to see a graphic of the closures.

“Most of our work on the bridge must be completed while the canal is dry,” said Logan. “We expect the majority of work to be done by March of next year, with remaining items to be completed by the Spring.”

Coldwater Group, Inc. of Pleasant View, Utah is the primary contractor for this project.