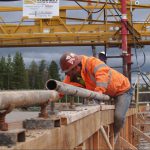 The Idaho Transportation Department (ITD) and the Idaho Associated General Contractors (AGC) announced the winners of the Excellence in Construction Partnering Awards at the ITD monthly board meeting Thursday, Dec. 17.

The Excellence in Construction Partnering Awards recognize outstanding partnering efforts between ITD employees and the contractor community. Good construction project partnering results in the delivery of quality projects, on time and within budget, which benefits Idaho travelers and taxpayers overall.

The inaugural awards competition was announced in October as a joint collaboration between ITD Chief Operations Officer Dan McElhinney and Wayne Hammon, CEO of the Idaho Associated General Contractors. Applicants were encouraged to submit for construction contracts underway today and those built within the last three years.

The applications were reviewed by a judging panel of state and local partners and evaluated on criteria related to how well the project:

The winners, announced at the ITD monthly board meeting this December, were recognized for earning gold, silver, bronze and honorable mention awards.

One project was unanimously selected as the ‘Top Gold’ award winner, for its outstanding partnering efforts and uniquely difficult circumstance—the rockslide removal and rock blasting project on US-95 following a rockslide near Riggins in July 2020.

Below is a comprehensive list of the 2020 Excellence in Construction Partnering Award winners:

The goal of the awards is to increase awareness about partnering efforts by recognizing team solutions, sharing lessons learned, and highlighting best practices for infrastructure projects of all types and sizes.