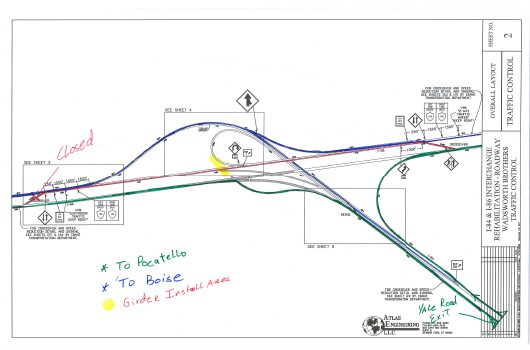 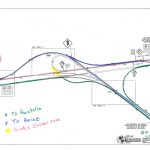 Traffic will be detoured overnight next week for motorists heading eastbound on Interstate 84 from Burley toward Pocatello as crews work to place girders on the newly constructed bridge.

This temporary traffic pattern is expected to be in effect between the hours of 9 p.m. and 5 a.m. during the nights girders are placed. Work is anticipated to be completed within a week.

“Detouring traffic around this portion of the work zone ensures the safety of motorists who would otherwise be traveling underneath the bridge,” said ITD Project Manager Travis Hitchcock. “Crews will be working to place the girders at night in order to reduce traffic impacts during peak traveling hours.” 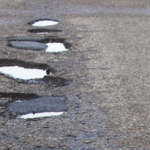 The department has been working to accelerate construction and reduce costs in order to extend the project limits following a mid-January ITD Board vote to advance a project to repave a smaller segment of I-84 between Karcher Road and Franklin Road.

With design support from ITD’s Pocatello office, work originally slated to begin in 2018 and 2019 will be constructed this summer. Also, key to moving this project forward is support from the cities of Nampa and Caldwell, along with the Community Planning Association of Southwest Idaho (COMPASS).

The project includes resurfacing the entire stretch of both east and westbound I-84 between Nampa and Caldwell with the majority of the work occurring over the course of four weekends. This timeline is significantly less than the anticipated four-month construction timeframe if work were to follow traditional construction and scheduling methods.

Staging work over four weekends provides a much safer work zone for crews. The weekend work also reduces the impact to the traveling public, the overall time to complete the work, and the cost of the project through less traffic management during construction. These cost savings allow ITD to extend the project to Franklin Boulevard.

“We recognize the importance of this corridor and have focused our efforts on completing this resurfacing work as swiftly as possible,” said ITD District 3 Engineer Amy Revis.

Details and impacts of the project will be shared through outreach with stakeholders, commuters, businesses and community members, and media in the coming weeks.

While this maintenance work addresses deterioration of the roadway due to age and extensive pothole damage suffered this winter, it does not include widening. Widening I-84 from Nampa to Caldwell is estimated to cost $330 million. ITD’s available funding statewide for pavement maintenance, bridge replacements and safety improvements is approximately $300 million annually.

Due to current transportation funding levels, ITD is focused on preservation and maintenance of the existing system. In the interim, ITD and COMPASS continue to aggressively pursue grants to start expansion of that roadway.