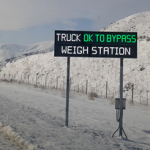 POCATELLO – New Weigh-in-Motion/Automatic Vehicle Identification (WIM/AVI) technology recently installed in southeastern Idaho at the Inkom Port of Entry (POE) is expected to fast-track benefits for commercial vehicles using the scales, the general motoring public, and local economies to the tune of $2.1 million annually.

Approximately 3,100 commercial vehicles use the port each day, and another 14,000 passenger vehicles pass by on Interstate 15. The estimated annual savings to the industry is based on time and fuel savings. If a truck is compliant, this message appears on the sign near the roadway and the truck can continue.

The motoring public will also see less congestion in the area of the weigh station because fewer trucks will be required to pull in for processing.

“The possibilities are exciting,” said David Hankla, who manages ITD Ports of Entry in eastern and southeastern Idaho. “The system has been fine-tuned compared to earlier installations, so the potential upside is tremendous.”

The WIM/AVI system allows commercial trucks that meet state size and weight limits to bypass weigh stations at highway speeds. It is estimated that 50 to 60 percent of commercial truck traffic will be able to bypass the port.

Loops embedded in the roadway track the movement of each vehicle through the system, which registers the vehicle’s weight and axle configuration as it travels over the scales at highway speed. As truck drivers cruise down the highway, the electronic system verifies that the truck’s legal weight, height, length, safety rating and credentials are in adherence with the law.

If everything checks out legally, the truck driver receives a green light on their transponder or a message on a changeable message sign directing them to bypass the weigh station and continue on its route. Conversely, if there are any legal issues, the driver receives a red light or direction to report to the weigh station for further inspection. Drivers may also receive a red light for a random pull-in.

This allows more time to be spent checking commercial vehicles for weight and safety violations. Trucks running safe and legal loads benefit by not being slowed down with redundant stops as they make their way across country. Economically, more freight moved more efficiently means better profit margins for the industries affected.

The installation south of Pocatello finished in late January. A grant from the Federal Motor Carrier Safety Administration kick-started the project. ITD’s part of the match was $596,000 for building slabs and conduit runs to support scale installation and hardware for the WIM system. The project was fast-tracked from project design phase to construction due to extremely tight grant deadlines.

Similar systems have been installed at the East Boise POE, the Huetter POE in Coeur d’Alene, and at the Lewiston POE. The Sage Junction POE in eastern Idaho, about 60 miles south of the Montana border, is slated for the next WIM/AVI installation, starting later this year. WIM/AVI locations are determined by factors such as volume of commercial truck traffic, need, and industry input.