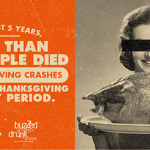 The Thanksgiving holiday is one of the busiest travel times of the year with millions of Americans hitting the road to spend time with family. The holiday’s celebratory spirit also makes it one of the most dangerous periods on our roads.

In recent years, Thanksgiving has become one of the biggest drinking holidays of the year.

“It’s the biggest drinking event we don’t talk about,” said Ken Corder from the Office of Highway Safety (OHS). “A lot of us like to catch up with old friends while we’re home for the holiday and to be honest and many of those meetings happen in a bar.”

This trend has resulted in what is being called “Blackout Wednesday” and it has been deadly on roads across our country. Over the last five years, an estimated 800 people were killed across the country as a result of impaired driving during the Thanksgiving holiday (6:00 p.m. Wednesday to 5:59 a.m. Monday). In 2016, an 37 people died each day during the Thanksgiving period.

In an effort to reduce impaired driving crashes, OHS is joining with the National Highway Traffic Safety Administration (NHTSA) and every state across the country in a social media blitz.

“We want to start the conversation to get people home safely,” Corder said. “If you plan to drink, designate a driver, call a cab, or use a ride share app. You’re there to enjoy the holiday with family and friends – don’t let a bad decision ruin that for all.”