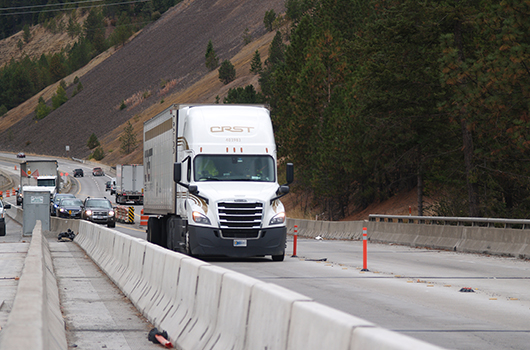 All lanes of Interstate 90 over Blue Creek Bay will reopen in November for the upcoming winter season. The speed limit will revert back to 65 mph, but drivers should expect a rougher traveling surface until repairs to both bridges are complete.

Underwater work will continue until the lake drops to freezing temperatures, and crews will return in early spring next year to finish repairs. ITD anticipates project completion in summer 2020.

“When work concludes for this season, we’ll be around 90 percent done,” said Ryan Hawkins, resident engineer for ITD.

Since work began in spring 2018, crews have focused on the supporting structures underneath and replacing the upper portion of the concrete decks with new concrete. Construction challenges have hindered progress on the bridges, requiring a third season of work that was not originally planned.

“Although we are close to being done, it’s more important to do it right and wait for better weather conditions,” Hawkins said. “It’s a good investment—after we’re done, the bridges will last another fifty years.”

Next year, permanent joints to allow portions of the bridge to safely expand and contract with the weather will be completed, and the final driving surface will be put down.

Record Steel & Construction, Inc. is the primary contractor on this $10.9-million project.