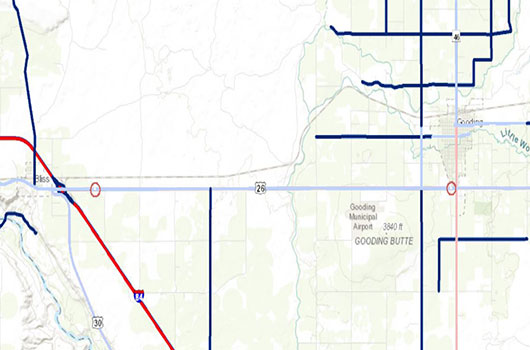 This winter, construction will start on two different canal structures on US-26 in Gooding County.

Work will first begin in early January to replace the canal structure near milepost 140 east of Bliss. Having reached its design life, the old structure will be replaced with a concrete box culvert.

Rehabilitation on a second canal structure, located near milepost 150 in Gooding, is expected to begin in February. During construction, the surface will be redone, bridge joints will be replaced and the railing will be repainted.

Drivers can expect temporary signals in both work zones to control one-way, alternating traffic with an expected wait time of two to three minutes. Construction in Gooding will require the temporary closure of the US-26 approach from California Street for a portion of the project. Signs will be in place to alert motorists.

“The majority of work on these structures must be completed while the canal is dry, which is why these projects typically take place during the winter months,” Project Manager Tom Logan said. “We expect both of these projects to be complete in April.”

Cannon Builders of Blackfoot is the primary contractor for both projects.