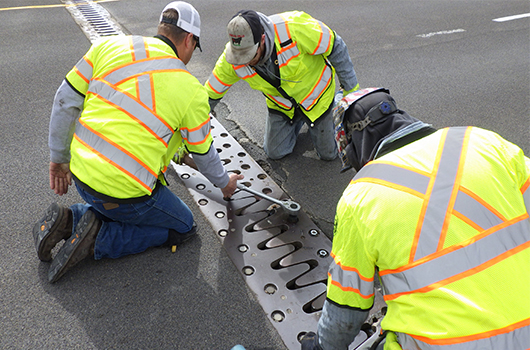 Earlier last week, crews in District 4 worked with the Headquarters Bridge section to repair damaged bridge joints on Interstate 84 near Glenns Ferry. It was most likely damaged due to the lower position of that joint compared to the rest of bridge deck and the resulting impact and vibration of passing vehicles. You can hear it on this video.

During a routine inspection, HQ Bridge Inspector Toby Griffin found that a portion of the bridge joint was missing, and another section was broken and loose.

“I was in the area doing a routine inspection of railroad structures below when I heard loud clanking sounds coming from the bridge deck above,” said Griffin. “This was not normal, so I investigated further and discovered the broken joint.”

Toby texted a photo of the damage to his supervisor, Dan Gorley, who quickly reached out to D4 Maintenance Coordinator Shawn Webb.

After discussing the situation, it was determined that a lane closure would ensure the safety of motorists driving westbound on the interstate. Despite it being after normal working hours, crews were onsite and implementing traffic control within the hour, while district and headquarter personnel worked into the evening to develop an emergency repair plan.

The following morning, crews were dispatched to the bridge deck to begin work. Repairs included removal of broken bolts, rethreading of damaged base plates, and welding and re-installment of the broken finger joint section.

“This was a great example of ITD personnel working together in an efficient and collaborative effort to ensure successful execution of one of the department’s key mission points – safety,” said Webb. “Four separate crews came together quickly to work as one to find a viable solution that allowed us to reopen the roadway within 24 hours of the initial discovery.”

The Bliss Foreman area crew, the D4 Bridge crew, the D4 Welder/Machinist, and personnel from HQ’s Bridge Inspection crew all participated in repair efforts of the broken bridge joint.

Planning is underway for development of a strategy to address the joints located on the westbound and eastbound bridges at this location. Webb stated that “the goal is to have a more permanent solution regarding this issue in the near future.”