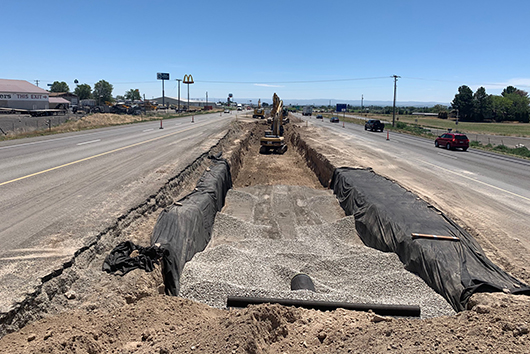 On Monday (July 20) work in the median of Interstate 84 will require traffic to be intermittently delayed. This is part of the interstate rehabilitation project that has been underway since May of this year. Carefully controlled blasting is required to loosen the hard rock in the median.

“We completed crossovers earlier this month and are now moving into the next phase of the project which entails storm water and draining construction,” said ITD South-central Idaho Project Manager Brock Dillé. “This phase of the project requires us to blast portions of the median which will have a short term impact on traffic.”

For the safety of drivers, traffic must be stopped in the surrounding area while blasting is underway.

“There are four locations in the median that we need to address,” stated Dillé. “We expect these activities to take place on various days between July 20 to August 20. Blasting may produce delays for motorists up to 60 minutes although we anticipate the delays to be much shorter.”

In addition to traffic being stopped on I-84, the interstate on ramps at Exit 165 eastbound, 168 westbound and 173 westbound will also be closed while blasting occurs. A portion of the work will require closures on the north and south frontage roads (Bob Barton Road and East Frontage Road) as well.

After each blast, crews will ensure the roadway is safe and free of all debris before reopening the highway to traffic.

Dillé explains that timing of this work is very important. “We have to blast during daylight hours, but we are very conscious of the impact it will have on the traveling public, which is why we are undertaking this task in the evening when traffic on the interstate is past its peak hours.”

Blasting will not begin before 7:30 pm.

ITD is asking motorists to consider using alternate routes while this activity is underway. Electronic message boards and signage will be placed on the interstate several days in advance of each event. Motorists are advised to adhere to signs and pay attention to flaggers and pace cars that will be utilized to slow traffic on the interstate.