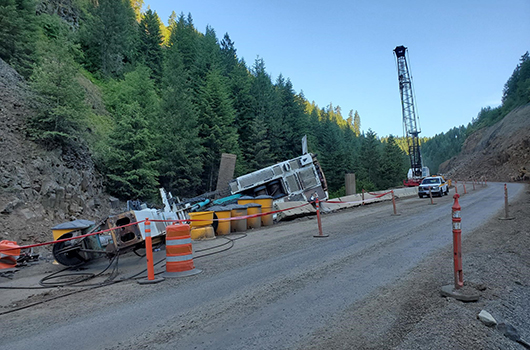 Blasting and equipment removal are planned near ongoing work to add a passing lane in Culdesac Canyon on US-95, requiring intermittent, hours-long closures from 7 p.m. tonight to 4 a.m. tomorrow morning (July 2).

A blast is scheduled to start at 7 p.m., during which the road will be closed and not reopen until after debris is cleared, approximately 1.5 hours later.

Between 10 p.m. and 4 am, drivers can expect longer closures as crews remove a crane that fell Saturday afternoon onto US-95. Traffic will be allowed to pass around midnight, but between midnight and 4 a.m., drivers may not be able to pass through the area for up to three hours. No detours will be posted.

The crane fell while installing a temporary bridge. No one was injured during the incident, and crews were able to open US-95 to one lane later that afternoon.

Blasting operations are planned for the next two years in this area, with updates posted to 511.idaho.gov and displayed on message signs near the project. Traffic impacts are not expected July 3-5, though crews will be working in the area.