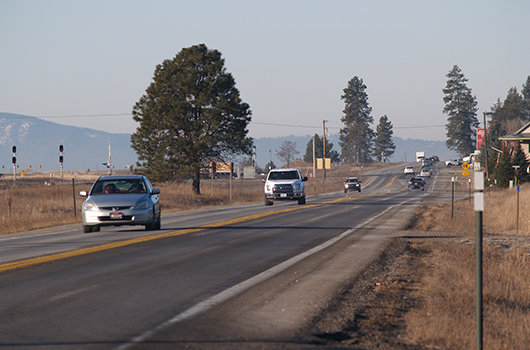 The first of several projects to add a center left turn lane to most of State Highway 53 from the Washington state line to Rathdrum begins next week.

“SH-53 serves more than 12,000 vehicles a day, including many drivers who commute between Washington and Idaho,” Project Manager Megan Koski said.

Work over the next two years will focus on a two-mile stretch starting near McGuire Road and continuing through Bruss Road, with additional safety improvements included at the Hauser Laker Road intersection. Two lanes will remain open through construction, but starting Monday, Aug. 22, speed limits will be reduced.

“The goal of this project and future ones is to make the highway safer by providing turn lanes for drivers,” Koski said. “Drivers won’t have to be worried about being rear-ended as they wait to turn left off the highway.”

Right turn lanes and lighting will be installed at the intersections of McGuire Road, North Church Road, Bruss Road and Hauser Lake Road. An acceleration lane at Cloverleaf Road will help drivers get up to speed and merge with eastbound traffic.

“This year, crews will add temporary pavement to the south so that we can maintain traffic as we build the base for the expanded road on the north side of the highway,” Koski said. “Then next spring we’ll pave over that base and open the new lane to traffic.”

Other similar projects are scheduled near Rathdrum in 2023 and state line in 2027. A maintenance project in late September will resurface patches within the first two miles near the state line at night to keep it in acceptable conditions until the 2027 project.

The department plans to fund a project at the next opportunity to build similar improvements to the four miles between Bruss Road and Latah Street.

Drivers are encouraged to check live traffic conditions at 511.idaho.gov.