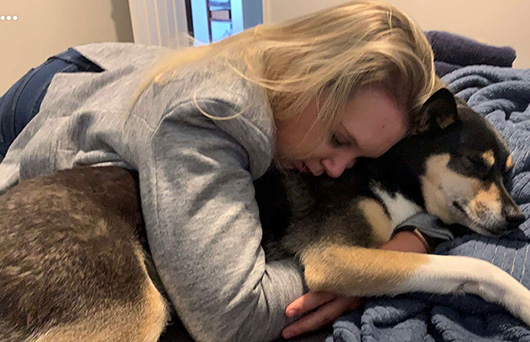 The photo above shows Frommer lying with her dog, Zoe, after the first day at ITD. Without special devices, Morgan said it was “exhausting” to try to listen and understand each caller.

New ITD employee Morgan Frommer, who has significant hearing impairment in both ears, is thriving in DMV’s Call Center due to a special device that cancels out the background noise, around both her and the caller, allowing Morgan to focus clearly on the customer’s request.

Frommer lost her hearing due to an auto-immune disease in 2015 at the age of 24. Rendered fully deaf by the disease, she had cochlear implants put in both ears in 2016 and 2017.

Cochlear implants work by implanting electrodes in the ear that capture sounds, bypass skin cells in the ear, and feed tones through tiny implanted microphones to replicate the sounds. It requires weeks of re-learning the brain’s responses. The implants work differently than hearing aids, which simply amplify sound. 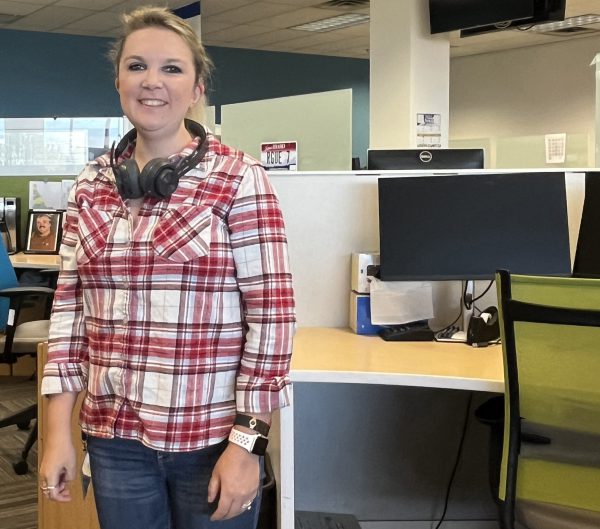 “The regular earphones that employees use did not work for me, but the Audiolink uses Bluetooth and streams directly into my implants,” Frommer explained. “I rely heavily on this device.”

Frommer met with IT Manager Pete Palacios, IT Infrastructure Engineer Michelle Cobler and some DMV Managers to discuss the problem and come up with a solution. The answer was a pair of noise-cancelling headphones with a microphone Morgan could speak into.

“The Audiolink does not shut off background noise on the other end since it is just a microphone-type device,” Morgan explained. “However, we were able to come up with an answer.”

In short, Frommer sets the speakers on her computer to the headphone setting so it streams through her Audiolink to hear calls, and then sets the microphone on her jabber and teams to the headset, so that customers/counties can hear her talk back and not hear any background noise. The caller’s response is fed into her cochlear implants, but her response is fed through the microphone of the specific headset.

This story hits close to home for Palacios, who’s own father needed cochlear implants as an adult due to hearing loss.

“It totally opened up another world for him when he got the implants,” Palacios said. “My dad had become a recluse and had basically holed up inside his house because the outside world was so difficult for someone with no hearing, but he started to go out and live again after he had the surgery.”

Frommer said her own experience was very similar.

“I had childhood cancer at age 5 and a very complicated brain tumor wrapped around my brain stem,” Morgan explained. “They were able to remove it, but I had extensive amounts of radiation in the treatment. The radiation brought several side effects, like balance problems, short stature, etc. I had a little bit of hearing loss in one ear, but it wasn’t until just after college that it really hit.”

The radiation caused significant hearing loss in the right ear, but Morgan had grown up with only about 50% hearing in that ear. She adjusted, though, and grew up that way. When the autoimmune disease came, it wiped out all of the hearing on the left side as well, so she had to rely on very diminished hearing in the right ear only. But due to the type of disease, it fluctuated, so some days her left-side hearing came back fully.

“Some days, I was fully deaf, and on other days my hearing would come back almost completely. But it was all brand new to me and I didn’t know what was going on. I wouldn’t go to work, and I wouldn’t get out of bed some days. It was extremely frustrating. I had my family, husband, and friends, but I knew no one with a cochlear implant. I didn’t even know what one was!”

Frommer says she cried A LOT because she couldn’t even have a simple conversation with her husband, Troy.

The implants changed everything.

“It brought my hearing back and I was instantly happy again,” Frommer said. “I think it took three months for my brain to know what volume to hear things at again –  when you first get activated, everything sounds loud and flushing a toilet sounds like Niagara Falls. Over time, with listening exercises, your brain learns the correct pitches of things and re-learns volume.”

One year later, the exact same thing happened to her right ear so she got implanted on that side as well.

Frommer, who came to ITD as a Technical Records Specialist 1 in September, was working as an engineer and then in supply chain movement before coming to the department. She volunteered with the help organization Hearpeers as a mentor back in Ohio before moving to Idaho. HearPeers pairs cochlear implant candidates with volunteers like Morgan, who have undergone the procedure and can answer questions about the surgery, recovery, the journey back, and any subsequent lifestyle changes that may be required.

“I love it at ITD because everyone is extremely helpful and I am not treated like a deaf person here. A lot of companies unfortunately don’t know what to do with a hearing-impaired employee. Even though I am fully deaf, I want to still feel valued and feel like I can make contributions or advancements in my job and feel confident in myself. ITD does a wonderful job of that for me.”