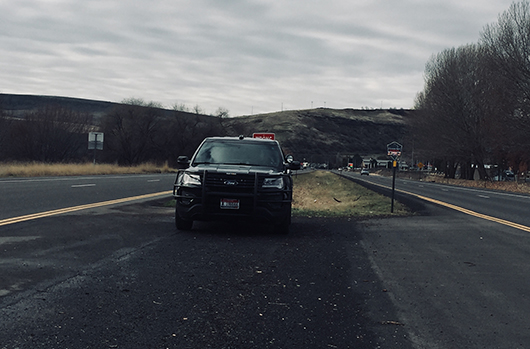 Highway safety partners came together on December 28 to raise drivers’ awareness near the Clearwater River Casino and Lodge on US-12 in Lewiston.

Officers from several local agencies participated in a special patrol near the entrances and allowed ITD traffic engineer Jared Hopkins to ride along.

For four hours, officers looked for traffic infractions and handed out a letter—instead of a ticket—to encourage drivers to discuss safety at home. Nearly forty drivers received a letter.

We’re working together for the safety of yourself and other drivers on this stretch of US-12/US-95 in front of Aht’wy Plaza (Clearwater River Casino and Lodge). We’ve lost too many from our community at this location recently, and we hope the sight of so many police cars reminds you to stay alert, whether you are exiting the casino or driving past it.

Several of these agencies will also be participating in a road safety audit next month to look at data regarding speed limits, crashes and driver behavior. The goal is to identify strategies to improve safety immediately in the area while design continues for a full interchange. The interchange’s design will be completed next winter, with construction following once funding is secured.

Our efforts today are to raise awareness, rather than write tickets. Follow our efforts on Twitter with #US12casino #live #patrolpartners and stay safe.

The joint patrol allowed law enforcement and ITD staff to watch the intersections together and share their thoughts.

“The patrol gave me the opportunity to observe, and I saw several vehicles failing to stop at the west exit and only one speeding,” Hopkins said. “I was also able to clarify how speed limits are set, so that the officers enforcing them knew why the limit is and remains 65 mph.”

Fresh perspectives will benefit the road safety audit, which is scheduled later this month.

View coverage of the event by typing in the hashtags or @IdahoITD on Twitter. For more information on commonly proposed ideas to improve safety in the area, visit the news tab at itd.idaho.gov/d2.