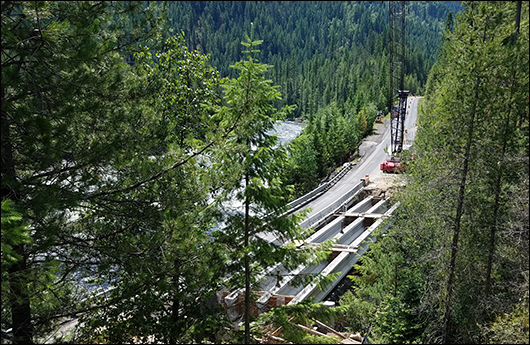 BOISE – The Idaho Transportation Department won a pair of President’s Awards from the American Association of Transportation and Highway Officials (AASHTO), signifying excellence in the transportation industry from among all 50 state departments, plus the District of Columbia and Puerto Rico.

The announcement was made Oct. 8 at AASHTO’s annual meeting, which was held this year in St. Louis, Missouri.

The US-12 Environment project (pictured above) involved two bridges on the highway, plus repaving the 50 miles of pavement between the two structures.

The highway borders the pristine Lochsa River through abundant U.S. Forest Service lands and provides access to popular fishing spots and hot springs; it also gives the trucking community a scenic shortcut into Montana as it winds its way up to Lolo Pass. The Lochsa River is a Wild and Scenic River, and is a breeding ground for steelhead, bull trout and salmon. ITD partnered with Idaho Fish & Game to allow fish to be carefully counted and relocated from the water under the bridges. In addition, all equipment on the project was rinsed before entering the work corridor and inspected by professionals to ensure noxious weeds were not transported outside the project area.

ITD pushed start dates for paving operations later into the summer to avoid the peak of rafting season, when shuttles are busy in the corridor. This partnership expanded to include shuttling pedestrians and cyclists through the corridor during paving.

“It is such an outstanding honor to be recognized for this work on the scenic US-12 Lochsa Corridor,” ITD north-central Idaho District Engineer Doral Hoff said. “This award could not have been achieved if not for the enormous collaborative effort that went in to this work. Many agencies, individuals and groups came together to ensure not only the protection of the environment, but also to find a successful path forward to achieve the work so people traveling and experiencing the corridor could do so safely and efficiently.”

The Research project (pictured below) on US-95 just south of the Marsing Port of Entry in Owyhee County was the solution to a problem with swelling clay under the roadbed. The clay was swelling up to seven inches in spots and damaging the pavement, thus shortening the life of the roadway, while also creating safety issues. The solution involved the use of geocells and put Idaho on a short list – Israel is the only other place to use this technique.

Geocells are typically used for erosion control on the ground’s surface, so it was a new experience for ITD, the contractor, and the manufacturers of the materials.

A research project looking into the viability of using geocells was conducted by Boise State University and sponsored by ITD.

“I am very proud of our entire ITD team for their accomplishments with this unique project,” explained ITD Southwest Idaho District Engineer Amy Revis. “I also want to acknowledge Boise State University for their collaboration with us on this project. This project is an excellent example of how our team always rises to the occasion when they are faced with a challenge. They are willing to put in the extra effort and think outside the box to find the best solution for the traveling public.”

There have been no crashes on that stretch of roadway since the geocells were put in place, according to Owyhee County Sheriff Chief Deputy Lynn Bowman. 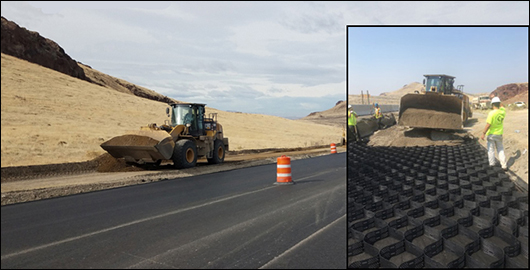