On Wednesday, September 15, the Middleton City Council will consider a revision to its Comprehensive Plan regarding the future Highway 44 that will have ripple effects for transportation far beyond the city limits.

For the last two decades ITD has partnered with City of Middleton leaders to develop an alternate route for the highway that would be constructed to the south of the current roadway. The City Council will consider eliminating the alternate route from its comprehensive plan and approve new development that would build on top of the open space currently slated for the future highway.

The future alternate route was shared at two public meetings in 2019. You can see the click on the links to see the West Half and East Half of the proposed route.

What happens to the future of the highway? 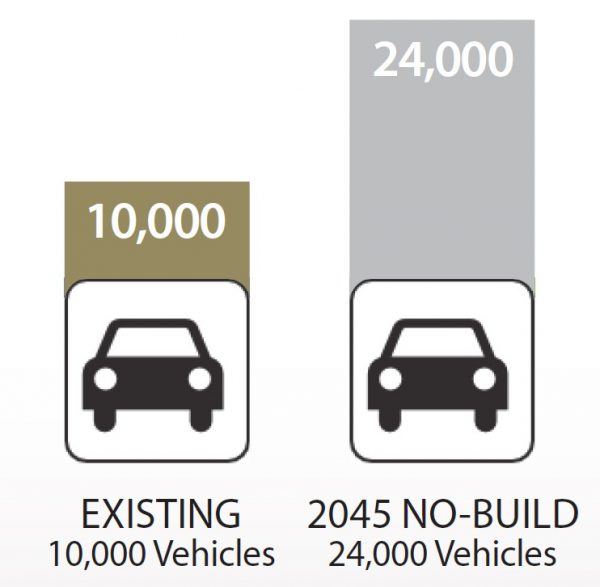 The last two decades of work have laid the groundwork for a transportation network that can support the extreme growth in Middleton, Star, and Eagle.

The growth projections for the Middleton area, which are somewhat conservative, suggest 24,000 cars will drive on the highway by the year 2045. Today, the daily trip count is around 10,000. Congestion already experienced will only get worse. As highway congestion increases, typically the number of crashes also increases.

ITD’s Mission is “Your Safety. Your Mobility. Your Economic Opportunity.” These three pillars of the Department go hand-in-hand. Fewer crashes keeps people moving, energizing commerce. The alternate route for Highway 44 would achieve these goals while accommodating for the forecasted growth in the area.

Take away the option of a future alternate route, and what happens to highway traffic is uncertain. ITD has looked at a couple options at a high level. The first option is to keep the highway as-is. 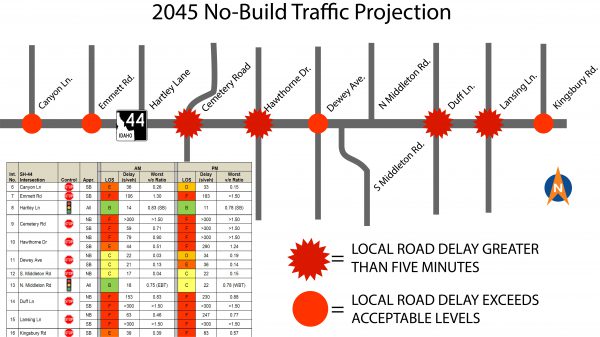 The biggest “pro” of that option is the existing buildings downtown will not be impacted. The biggest con is pretty obvious – there’s no way the existing three-lane highway will effectively move 24,000 cars a day. ITD’s projected level of service for downtown intersections has nearly all of them seeing excessive delay times. In some circumstances, it could take you more than five minutes to get onto the highway from a local road.

The second option would be to add capacity to the existing highway to move more vehicles. This option is not without its downsides. We’ll share three big ones.

Impacts to existing businesses and land use

The first is the available space for the lanes. Near the fire station in particular, there is not enough room to add more lanes. In order to fit everything in, ITD will likely need to purchase existing buildings and demolish them. A preliminary scan of the total impacts of a widened highway suggests 76 different properties will be negatively impacted.

The second pain point comes with the existing number of roads and driveways accessing highway 44. Every access point introduces conflicts between vehicles, pedestrians, and cyclists using the roadway. Transportation engineering reduces these conflict by removing accesses or restricting the movements in and out of those access points.

In order to promote safety and mobility on the existing highway alignment, ITD will likely need to install median curbs, restricting left turns on and off the highway. Similar action was taken on Eagle Road. The diagram below provides a sense of what that means for local travel options.

A third downside is the delay this will force on any improvements to the highway in Middleton. The process to achieve environmental clearance has taken nearly two decades already. Should the alternate route be removed from Middleton’s Comprehensive Plan, the clock on those efforts will be reset.

Environmental clearance is needed to get federal funding for transportation improvements. Pushing back that clearance another decade or two means the highway in Middleton won’t qualify for those dollars, ITD’s biggest bucket of money. Meanwhile, growth and congestion will continue.

ITD has partnered with the City of Middleton on the future of Highway 44 for more than two decades. We will continue to do so. The Department strongly recommends the Council continues the City’s historic support for the alternate route and preserve the corridor in the Comprehensive Plan.

Regardless of the Council’s decision, we are committed to provide the best customer service we can. Our goal in sharing this information with the public is to bring clarity to a complicated process and to understand the downstream consequences of a decision. The folks at ITD are your friends, neighbors, and relatives. We want to see the community of Middleton grow and thrive. It is our belief that open dialogue and the best information will bring about the best results for us all.